On 21Nov10 I played a couple of games of Disposable Heroes against ChuckarooBob at the Basement of Heaped Miniatures. We used a scenario book from Skirmish Elite called Tanga 1914. We played the scenario "First contact" with my Chinese standing in for the Germans defending and Chuckaroo's British for the British. I barely stopped the British in the first game and we decided to refight the scenario with Me attacking with the Chinese and Chuckaroo defending with the British. The game would last sixteen turns and both of us would get a random reinforcement roll. My objective was to get ten models off of his table edge and his objective was to stop me. I rolled for reinforcements and received a two model company command team. The book is for a different game so we decided that the company commander would give me a one better guts rating. Chuckaroo rolled and received a lorry with a machine gun. 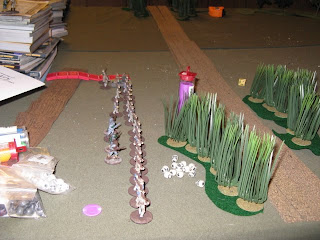 The Chinese start position. I chose to try and make it up the near side of the table. 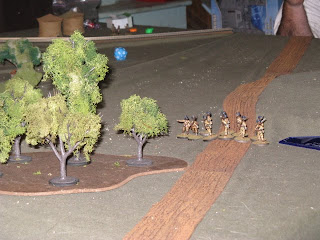 Chuckaroo set up one rifle squad at the start line right behind the woods I planned to run for. Just out of frame behind the hill is his lorry with machine gun. 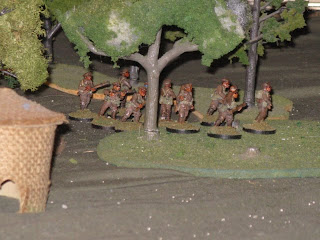 His other rifle squad and command section started on the table in the jungle . 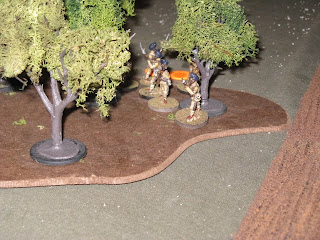 The Sikhs move into the woods to the edge and I fire on them with the Chinese heavy machine gun and rifles, they are suppressed and fall back. 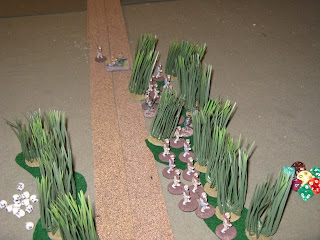 The Chinese rifles move forward into the grass. 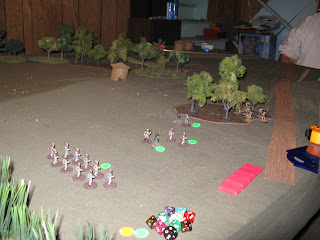 After a series of rushes the first Chinese rifle squad is all but gone and the command section is running for the woods and cover. 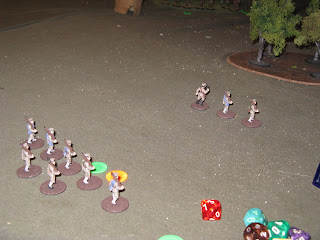 The Sikhs finish of the command section and the lorry's machine guns suppresses the last full rifle squad. The company commander joins the two surviving riflemen. 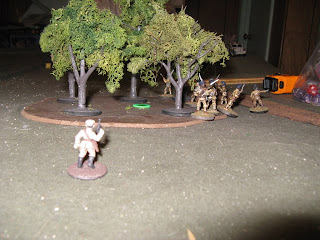 End game, the Sikh's gun down the last two rifle men and the Company commander orders the rest of the Chinese to retreat.

A much different game than the first one. I still had fun but decided that running for the jungle on the other side of the table may have been a better plan. Chuckaroo getting the lorry mounted machine gun made a big difference in the defence. We discussed the other reinforcement options and decided that the extra rifle squad Chuckaroo got in the first game was much better than the company command section I received in the second game.

Another thing that came from this game was that Chuckaroobob won fair and square. Now he can't complain that I always win.
Posted by ColKillgore at 11:14 AM