We had another day of gaming at the Basement of Heaped Miniatures. ChuckarooBob and I decided to play some more Disposable Heroes but with a twist. Instead of our usual equal point value game we decide to use a historical scenario. Chuckaroo broke out a scenario book called Tanga 1914. The book is from Skirmish Elite and is set in East Africa WWI. Chuckaroo set up the table according to the fist scenario "First Contact". The scenario represent the first clash between the British and Germans in the Tanga campaign. We wanted to use our figures and tie the battle into our pulp campaign so my Chinese Warlord troops would stand in for the German defenders and Chuckaroo British ands Sikhs would be the Attackers. The British had to advance ten models off of the defenders board edge and the Chinese had to stop them. The game lasts sixteen turns. In the scenario book there is a random reinforcement chart and I rolled and received a section of six inch trench. 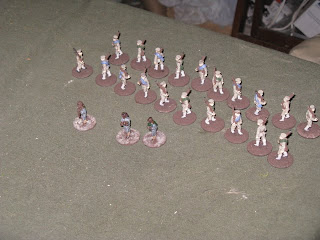 Here is my starting force. I had a three man command section with rifles and two ten man rifle squads with rifles. 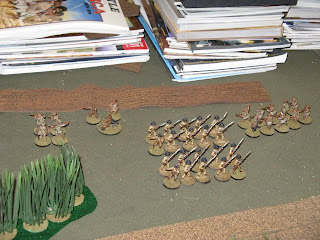 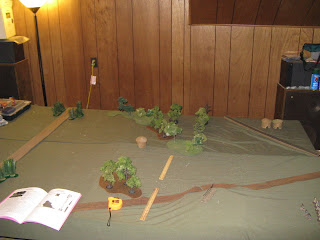 This is the starting battle field. The Chinese could deploy anywhere to the right of the rulers in the foreground. While the British start on the left board edge and have to cross the table. 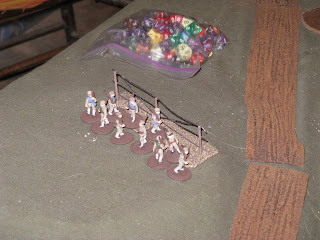 I placed my trench section on the hill on the right and positioned a rifle squad in it. 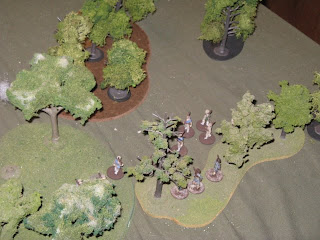 The Command section and other rifle squad start in the jungle on the right side of the table. 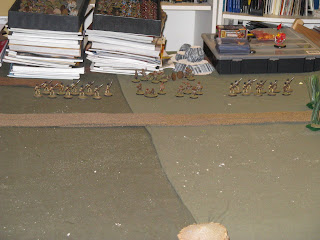 The British form up and march onto the table. 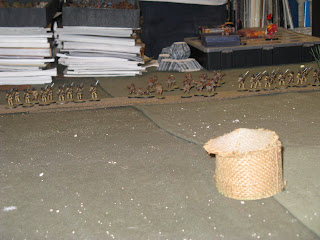 The British move into the ditch and get ready to cover the open ground. 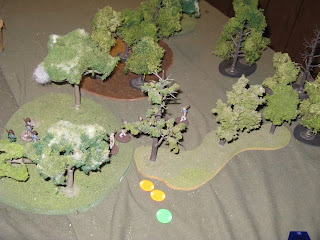 I moved my rifle squad up to the edge of the woods to shoot but were hit by British fire and double suppressed. Lieutenant Poc failed to rally them and they had to fallback deeper into the jungle. 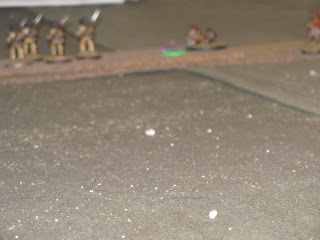 The Chinese riflemen in the trench on the hill kept up a steady fire on the British Heavy Machine gun wounding the crew. 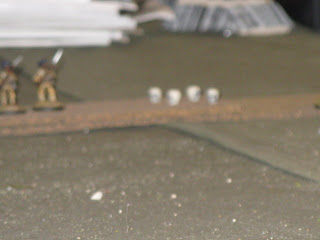 Then a good round of shooting kills all the crew and puts the machine gun out of action. 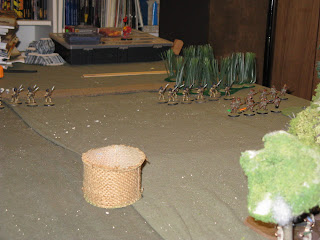 One squad of Sikhs advance up the middle while the other Sikh squad, the pioneers and the command section advance toward the jungle. 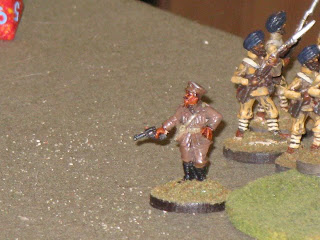 Long range fire form the Chinese kill all the pioneers but the Corporal, who continues the advance. 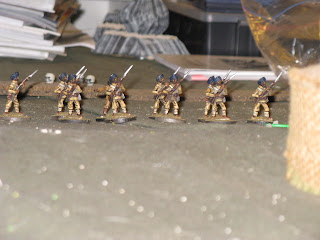 The Sikhs advance up the center of the field almost untouched. 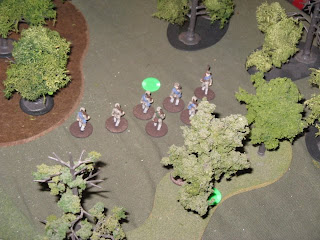 The Chinese rifle squad pulls back from the jungle edge and set up to stop the British advance. 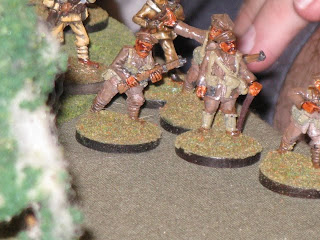 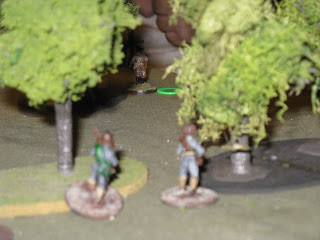 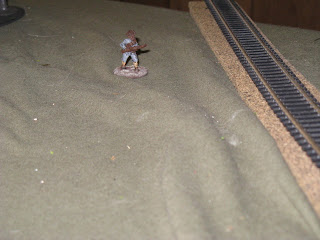 Lt Poc repositions back toward the elevated railroad berm. 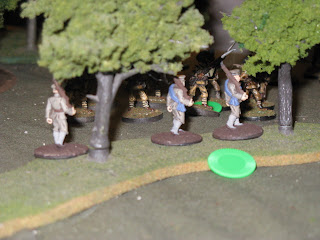 The Rifle squad stops to make to the Sikhs pay. 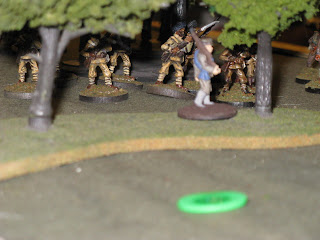 The Sikhs return fire and the last rifleman watches his compatriots fall. He doesn't run, he never really liked the guys in his squad anyway but he couldn't let those Sikhs get by with shooting at him. 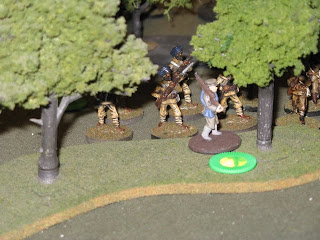 The Sikhs close in and the last rifleman goes down. 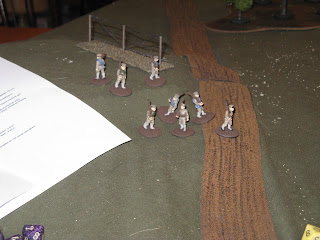 The surviving Chinese rifle squad leaves the safety of the trench to get a better shot as the British break cover behind the Jungle. 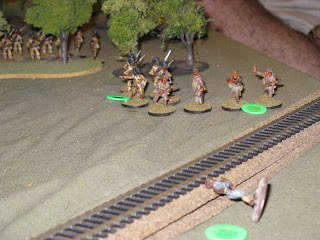 The British break cover but Lt Poc lays prone behind the railroad embankment and lays down a steady fire at them. 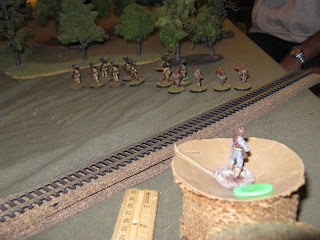 As the rest of the Sikhs Break cover Lt Poc sneaks back in to the hut and begins to return fire again. 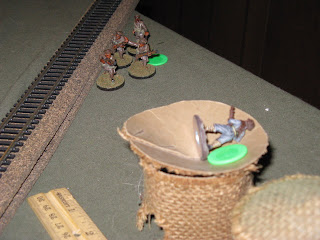 The British Command section crosses the berm and finally manages to put the Heroic Lt Poc down. 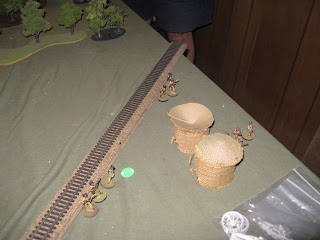 The British at end game on turn sixteen. Most of the last Sikh squad was shot down by the Chinese on the hill. Chuckaroo had ten models left but could only get seven off of the table. 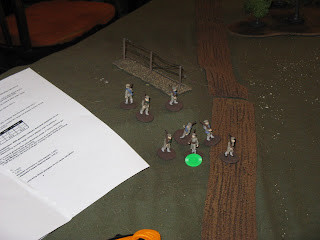 My surviving Chinese rifle squad made the last effort and managed to knock out enough troops to keep them from getting off of the board and winning the scenario.

I had a good time playing the game and it came down to the last turn. It was fun and we decided that we would refight it with me attacking. I will post that one up later.
Posted by ColKillgore at 10:10 AM