Another In progress unit. My converted Praetorian Lancers I field as Rough Riders. The basic conversion is a Praetorian standard bearer torso greenstuffed to a heavy weapon gunners legs. I also used one sergent torso to be the vet sergeant and a bugler torso. I added the bugler for style but added a lascannon tip from the old obliterator weapon tip sprue to his jetbike to proxy as special weapon. I planned to field them last weekend at the GameOnGw Gamesday at the Cage in High point NC but diddn't get the chance to break out the guard. 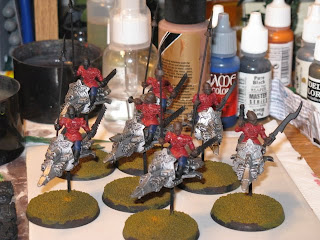 I have fielded them a few times and they have either done well or just been gunned down. Either way they did it in style.

Posted by ColKillgore at 5:51 PM