After getting in a few games with the Beastmen using 8th ed Warhammer Fantasy Battle I have decided to take the plunge and rebase my collection of ungors with spears and hand weapons onto 20mm bases. The funny part is some of the older metal ungors were originally on 20mm bases, then I rebased them onto 25mm bases to match the last army book with mixed herds and now rebasing them all back to 20mm bases. 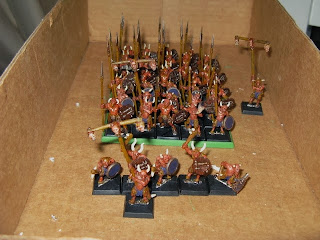 The freshly rebased Ungor herds. In the previous army book the ungors only had the option of being armed with spears. They also didn't have any option to use the ungor command models from earlier editions. The solution was for me to just mix in the hand weapon armed and command models in and play them as spear armed ungors. In the new army book they returned the options for hand weapon armed ungors so I have decided to split off the unit of hand weapon ungors. This leaves me short of the target forty models in the ungor spear man unit, but I have a plan. 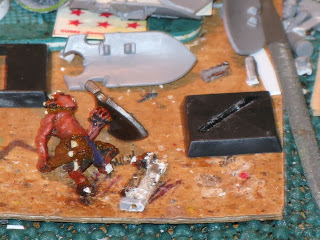 The one casualty of the rebasing, a hand weapon armed ungor broken. 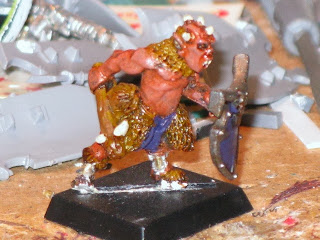 After much pinning and readjusting the ungor is back on the base. 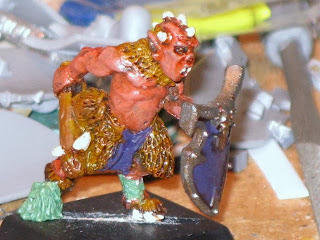 After a bit of greenstuff it is ready to go. 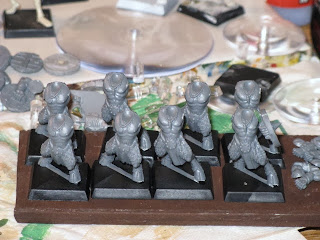 To round out the units I pulled out my last eight ungors from the oop Beastherd box, trimmed them down and based them on 20mm bases. 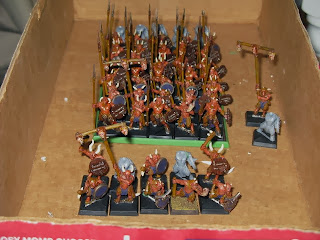 So after fixing the broken ungor, building the eight oop ungors and pulling a musician from the ungor raiders I have two units to add to the army. I will have a forty strong unit of Ungors with spears and shields and a ten model unit of ungors with hand weapons. It leaves me with a left over standard and a spare ungor body. the banner I can just add to the back of the spear unit for a forty one strong unit and I am thinking about using the extra ungor to convert an Ungrol Four Horn special character. The Fantasy league at Gaming Underground starts up next weekend so the ungor will be seeing the table soon.

Next time maybe just get some magnetic 25mm bases and put a piece of magnet sheet on the bottom of these bases.

It is annoying having to rebase them but at least GW diddn't decide to remove them from the game like the zoats and my chaos thug bowmwen. If the next edition wants them rebased back to 25mm I think I will use your idea and put them on 25mm magnetic bases and not go through the whloe process for a third time.