I finished up a unit of old school style Skeleton archers for my 3rd edition warhammer fantasy battle Undead army. 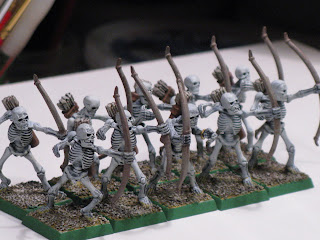 The start of the unit was four of the skeleton archers from the original Skeleton Army box I bought back in '89 or '90. When I hopped back on the third edition train I wanted a unit of skelton archer. I searched out the skeleton bits box and found five sets of the 20 year old archer arms. I only had to use one set of the newer askelton archer arms. I had plenty of newer but also oop skelton bodies so I set to work. 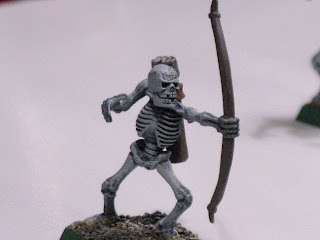 One of the newer style bodies with the twenty year old skelton archer bits. 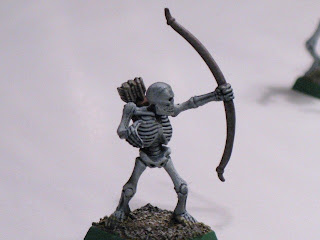 My favorite pose. A pose that you can no longer acheive using the newer GW skeleton archer bits. 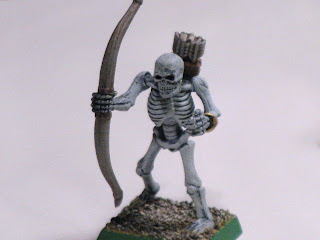 The odd man out, unit champion, uses the new skelton archer bits that have the bow in the right hand. I still had enough of the original quivers to equip all of them the same so he doesn't stick out too much.

I am working through my Vsmpire Count collection getting everything built and painted. I still have a handfull of characters, A black coach, a corpse cart, more skeletons, more Wraiths and Spirit hosts that are still in progress.

Old school or not, these look great. My buddy has a Vampire Counts army too - interesting abilities. Best, Dean

Thanks, I have had some of them for over 20 years and they are still ready for the table.