Progress continues on my Ogre Kingdom warhammer army. I have been collecting models since the Ogre Kingdom army was first released. In the previous ogre kingdom army book the Gnoblar trappers were a separate unit from regular Gnoblar and had a 0-1 restriction unless you fielded a Hunter. At one time my plan for the army was to field a hunter and use the two gnoblar trapper units as cheap core choices. I bought enough gnoblar trapper blisters to build two minimum sized units but never opened the blisters.
Around 2008 I opened the blisters up and they were mispacked. I only had the bottom piece of the gnoblar in a trap and was missing four of the top trap jaws. I called up GW and they sent me a replacement pack that had one complete gnoblar in a big trap. 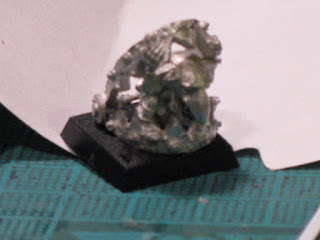 The gnoblar in a big trap complete. 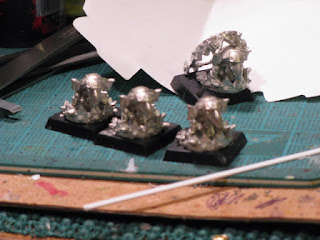 A comparison from the gnoblar trappers missing the pieces and the completed one. The new Ogre Kingdom army book has the trappers as a unit upgrade but I still need a bunch to show them in several units of Gnoblars. to make a few more to play with I came up with a plan. Plan A. I took one of the extra bottom trap jaws I had and pinned it to the gnoblars hands 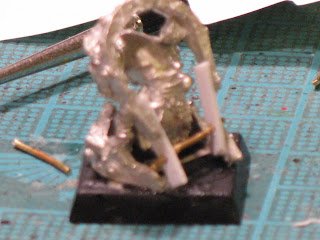 Next, I took a couple pieces of styrene strip drilled.Then I ran a piece of brass wire through the holes to be the hinge. Finally I glued the styrene strip to both jaws. 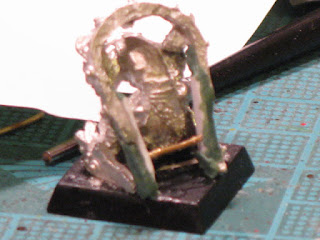 Then I added some green stuff to cover the styrene strips and thicken up the back of the upper jaw. 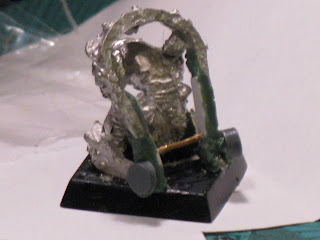 Last I added a couple pieces of sprue to be the bolts holding the hinges together. After finishing this first one I decided that I needed another plan to complete the other three with missing parts. 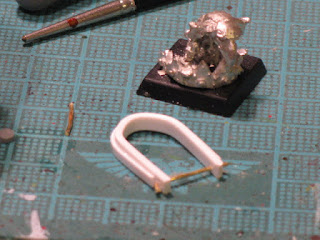 Plan B. I raided my styrene supply and came up with a new plan. I cut several sections of the strips.Then I drilled holes in each end. I bent the strip and ran a brass wire through the predrilled holes and bent the wire to hold the bend in place. Then I cut several strips from a smaller sized styrene and glued it on the outside of the jaw. i let it cure for a while so the everything would be solid for the next step. 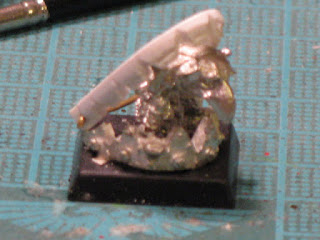 Next, I used a file to make notches in the jaw and then sanded the edges down a bit. Then I glued the upper jaw to the back of the bottom jaw. 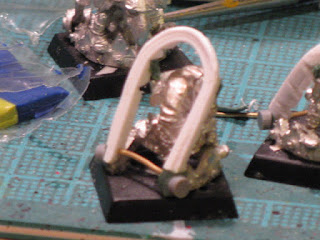 After the glued had dried, I reinforced the join with some greenstuff and then glued on a couple sprue off cuts to be the bolts for the hinge. Last, I added some green stuff from the gnoblars wrists to the upper jaw. 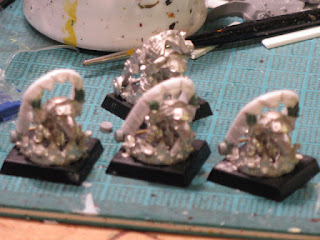 I added some more detail to the Gnoblar Trapper hands and called them almost good enough. I still need to add a couple more greenstuff touches but once I get them painted, i think they will fit in well with the gnoblar hordes.

Those are some good fixes. I hate when I get a messed up mini, but it seems like you made the best of the situation.

Thanks. Trying to fix models with either missing parts or micasts has really helped me learn more about making conversions.

You're the man! If I tried something like that it would end up looking like a big blob of glue.