Due to a change in my Apocalypse army I decided that Kharn the Betrayer needed a Chosen squad loaded with power axes to run with. So to the berserker and chaos warrior bits boxes and I have Kharn's chosen squad. 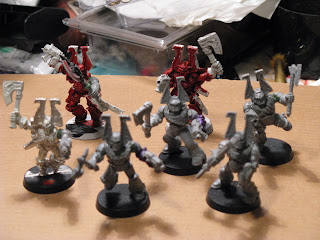 I will be using Matt P's World eater Warband  Apocalypse formation. It can be found in the data sheet section on the Apoc-Eclipse Wiki here . The formation lets you give different units the Mark of Khorne (+1) attacks, fearless, and furious charge. The formation also gives models upgraded a rule that axe armed models that roll a 6 to hit get an additional attack. Three of them are metal Khorne berserker aspiring champions and the other four are mostly Berserker bits. The champs were mostly converted when I acquired and didn't take much to finish them. My selection of appropriate chaosy power axe bits was a little limited so I selected some chaos warrior axes and used them. With the changes in 6th edition 40k making power axes initiative 1 they might end up on the bad side of some Grey Knight but you win some and lose some.  I am looking forward to the game and will get these ready by game day on 8September12. 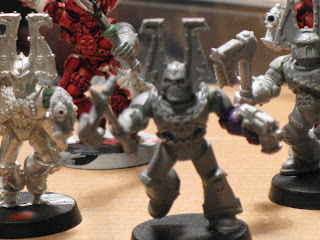 My favorite of the bunch