I have started working on my second Sisters of Battle Exorcist. The 40k League has started back up after a break for everyone to get used to the 6th edition 40k rules. We have also jumped up to 1250 points. The big thing about the points jump is, I will be able to field two Exorcists and be under the league 25% point limit to any force org slot other than troops. 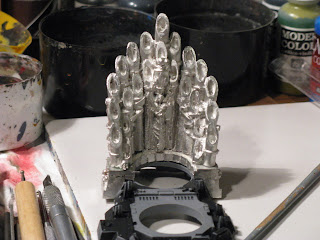 I picked up the bits for the Exorcist from Aaron R and dropped them in the simple green to clean them up. The one bad thing is the bits just don't fit together that good and I have been busy with green stuff and contour putty trying to get it where it doesn't look too gapped up. 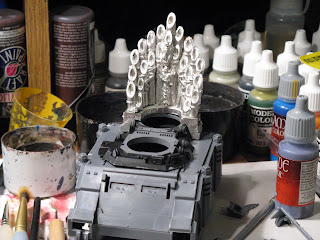 The bits came minus the rhino, but after a raid into the Closet of Woe, I come out with a chaos space marine rhino ready to be brought back to the light. I have a couple days till the next League Game day, I might not get it painted but it will be ready for the table.