I have wanted to build a 13th SS Handschar force for a while. A while back I picked up a bunch of the Handschar heads from Bolt Action and planned to convert a platoon for Disposable Heroes. 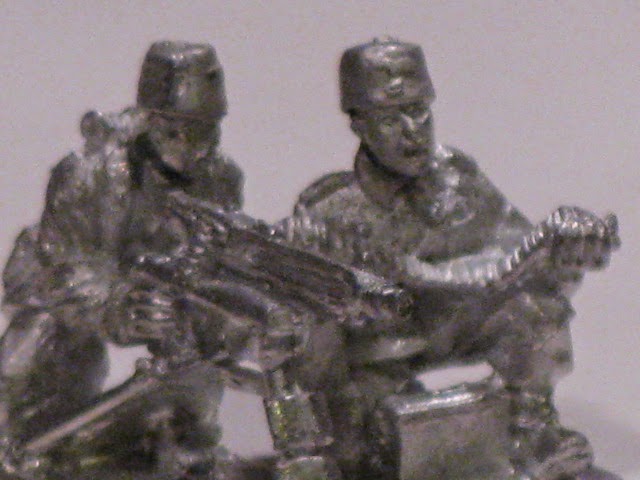 So far this is the total of my force, one MG 42 heavy machine gun team. I used the Handschar heads on a Bolt Action German hmg team. I have picked up some other German models but haven't converted any of them up yet.

The big news is that Brigade Games has released two packs of 13th SS Handschar troops in their Ends of the Earth miniature line. The first pack German 13th Mountain Division-Handschar has two models with MP-40s, one model with a GEW-43 semi auto rifle and a two man machine gun team one with a Kar98k and a MG-34.

The second pack is German 13th Mountain Division-Handschar II . This is the squad builder pack that has five models equipped with Kar98k rifles.

Combining the packs should give you a good squad so a couple of both packs will give a good start to the platoon. To be accurate I will probably need to get a pack or two of regular SS Germans for the ethnic German officers and NCOs. One thing I want to add to the army but that may be ahistorical, is a squad of Handschar armed with MP43/StG44 assault rifles. I had an argument with a rivet counter that said there was no way the 13th Handschar on anti partisan duties would have been issued Mp43s and that I just wanted the Mp43s for a gaming firepower advantage. My counter was that the MP-43s were being issued from early 1943 and thousands of them were floating around the Eastern front although my best argument was that a bunch of Fez wearing guys with Stg 44s would just be too cool, didn't compute to him.

Rivet counters? Say it isn't so!

I know it is hard to believe but they are out there.