Some more retro Warhammer. I have been getting ready for a game of Third edition Warhammer Fantasy Battle against Chuckaroobob at the upcoming GameOnGW games day 15 Dec2012 at Gaming Underground in High Point NC.

Back in third edition warhammer fantasy battle there was only an Undead army not the Vampire Counts and Tomb Kings in the current edition of fantasy battle. So you could field skeleton bowmen in any Undead army. 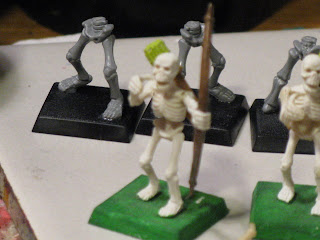 Another blast from the past, one of the skeleton bowmen from the original Skeleton Army Box set. 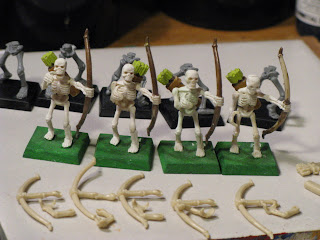 My four remaining bowmen. I have at some time lost one of them from the original box but still have the other five bits I didn't use. Back in fifth edition the Lahmian vampires could field units of skeleton bowmen and I bought a box of tomb king archer to make a unit for my Lahmian army. Before I built them a new army book came out and did away with the blood line special abilities. Now I have enough bits to build twenty five archers. I can knock them out rather quickly but while reading the Warhammer Armies book I came across the option for a skeleton unit to be equipped with arqubuses or the more current handguns.

So I know I have some handgunners around in a box some where, and a quick off with their heads and glue on some zombie heads, then bobs your uncle, Undead handgunners.