A update on the Iron Warrior Heavy Bolters. 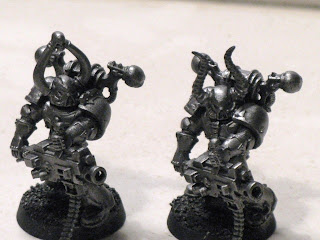 I managed to get them primed black and then give them a good drybrush of bolt gun metal.

These will give me four heavy bolters for a havoc squad. I am still deciding what new models to add to the army. My original plan was a rhino swarm with a bunch of minimum squads with lots of special weapons. After further thought, I don't know if I will have fun playing that style army and I still need to get four more old style rhinos to field it. Now I am thinking of a Chaos marine horde army. Nothing like sixty chaos marines and a half dozen or more vehicles in 1850 points.

Scott, come back into the light! Chaos? Bah. humbug.

Hey Chuckaroo, I think you might have it wrong, I bask in the light of choice and free will while you hide in the shadows of the Corpse Emperor and his society of ingnorance.