I have played my first game of 2011, with hopefully many more to follow.

We had another game at Casa de Killgore for some Disposable Heroes action. The scenario was US army versus Japanese backed Chinese holdouts. The scenario was the Americans attacking while the Chinese defended. Chuckaroo and Big Roy fielded 1000 points of American verses me with 700 points of Chinese.

The American force was a US army infantry platoon backed by a 105mm howitzer, a couple heavy machine guns and the King of Battle M3 Stuart tank.

The Chinese force consisted of a full strength Chinese Infantry platoon, with one squad equipped with explosives, a Ha-Go Japanese light tank, and a 81mm mortar. 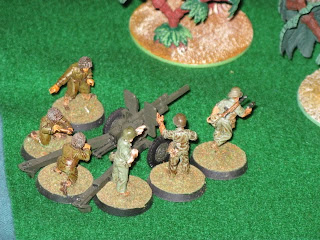 Only an Honor less Imperialist dog would bring a 105 howitzer.
(According to Chuckaroo it was the best 109 points he never spent.) 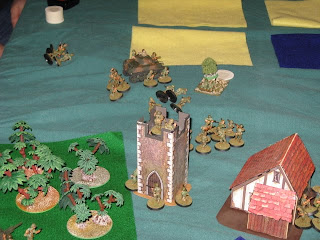 Then go onto put his command squad with a radio in the stone tower to spot for the gun. 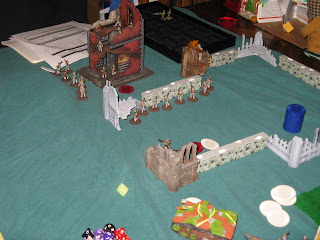 The stalwart defenders manning the defences backed by their trusty Ha Go tank. 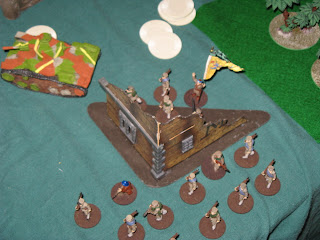 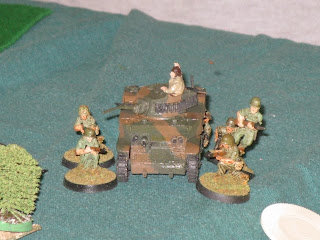 The dreaded M3 Stuart tank closes to bring its deadly firepower to bear. 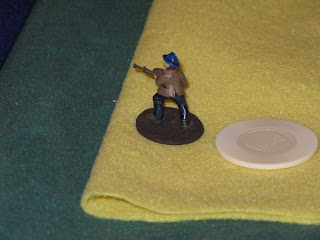 The lone gunner survivor of a rifle squad takes cover at the edge of a dry rice paddy and blazes away at the Imperialists spotting for the artillery in the stone tower. After losing several models from his command squad he withdrew from the tower. 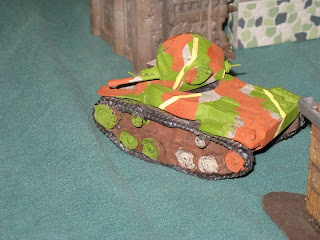 The Ha-Go brews up. Unable to penetrate the thick armor on the M3, it had concentrated its fire on the infantry until the M3 acquired it and finished it off. 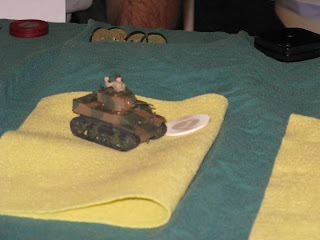 The King of the Battlefield, the M3 Stuart moves out, closing the distance to bring its machine guns into action. 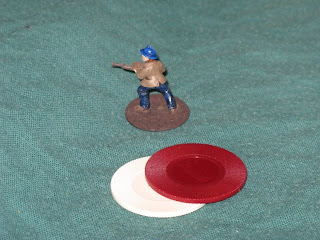 After leaving the dry paddy the Lone gunner tries to make it back to a friendly squad but takes fire and is pinned. 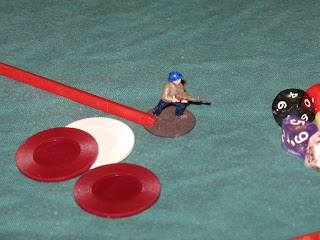 The Gunner takes more fire, fails his test and routs. 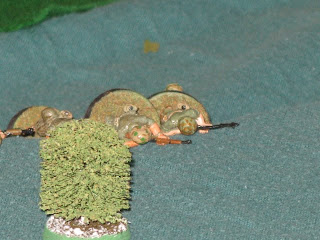 A group of prone riflemen take aim and 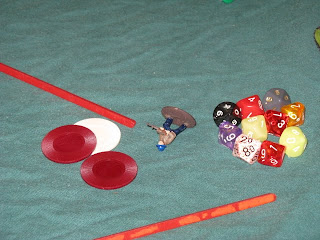 Finish off the lone gunner. 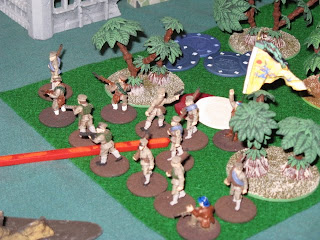 The Chinese command regroups after taking heavy fire from the M3. Along with the surviving rifle squad they decide that they have held the Americans up long enough and withdraw. 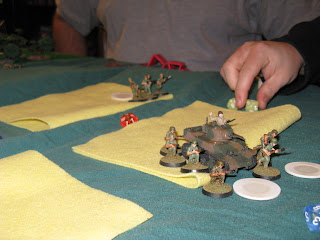 The American infantry creep along beside the Stuart as the Chinese decide to withdraw.
Once again a fun game. We got Big Roy to play and might get him to return for another game. The uneven points added an extra edge to the game for me. One of the big surprises of the game was the M3 Stuart Juggernaut. After we discovered the Ha Go couldn't hurt the Stuart from the front, it was down to a waiting game for the Stuart to get close enough for me to assault it with explosives. This didn't happen. The American kept up a heavy volume of fire either killing my troops or keeping them pinned behind cover. Once The last squad with explosives was killed it became a numbers game I couldn't win. I decided to concede the game and withdraw.
I had the best luck with artillery with my mortar actually hitting a unit, while Chuckaroo's 105 howitzer missed every shot of the game.
I have gone back to the drawing board and once I find that I16 fighter I have somewhere in a box, it will be rematch time.
Another thing is I need some more terrain. Disposable Heroes punishes anybody that moves out of cover. I am planning to build some Chinese themed buildings and make some Asian themed terrain. I want several rice paddies and a bamboo grove or two and maybe some stone wall sections. The sheets of felt are okay to get by with but well modeled terrain pieces can really make a game pop.
Posted by ColKillgore at 11:51 AM