I started these guys in October of 2007 and finished them up last Friday. they are done just in time for a new guard codex to be released and make them obsolete as a unit. All the models are Delaque gangers from the gw necromunda range. Most of the troops came from me buying every delaque ganger I could get my hands on. Initially they were part of my Genestealer Cult army but after the release of the current imperial guard codex I bit ordered (when you could still bit order) enough las-cannons to fill out a platoon. I had already converted two of the heavy stubber armed heavies to have conversion beamers, which I proxied as las cannons. To avoid confusion I ordered nine las-cannon heavies to round out the force. 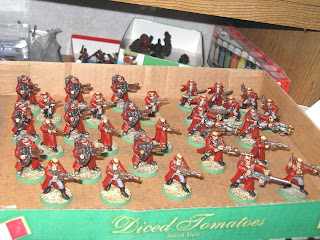 The Platoon, the Command squad and some extras. The extras include four squad leaders with a pistol and a close combat weapon, the two conversion beamer gunners and two knife equipped troopers. The knifemen are awaiting the new guard codex to be equipped with a ballistic weapon. They were converted to have special weapons for the Genestealer Cult army at one time but I broke the weapons back off when I started painting them to add to my guard armies. 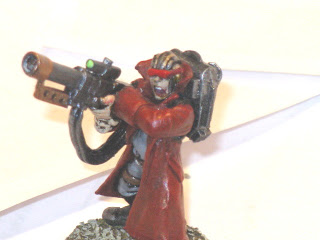 A close up of the Las-cannon gunner. They are all the same pose but they are easily identifiable as a las-cannons. A new question is if I am going to make 60mm bases to put the gunner and loader on to match GW's new policy about heavy weapon teams being mounted on a single base. 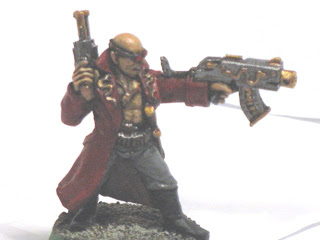 Here is the Platoon Leader. He started as a Delaque gang leader, then was a Cultist brood brother and now a Lieutenant in the Imperial Guard. 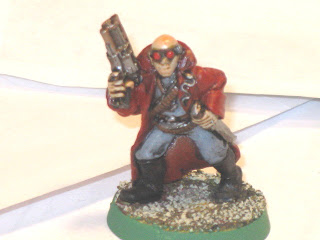 Here is a squad leader. The plan is for them to be a junior tech priest leading a squad of my adeptus mechanicus imperial guard. The idea to use them came from a tournament I played in. I had one opponent making an issue because he had problems telling the sergeant from the regular troopers. The sergeant had a bolter and the troopers had las guns so I couldn't process the problem. The sad part was I was playing a completely painted army with 90% of the models, a conversion of some sort and the other guy was playing a barely primed ringer army optimised for the terrain they had at the store hosting the tourney. Such is the tournament scene. 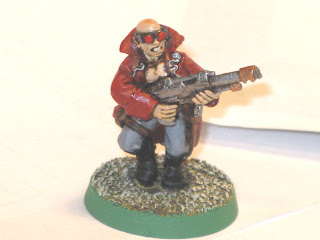 Hers is one of the troopers to act as the las-cannon loaders. I have 3 models of 3 different poses. I put the same pose guys in one squad to cut down on the "who is in which squad?" game. 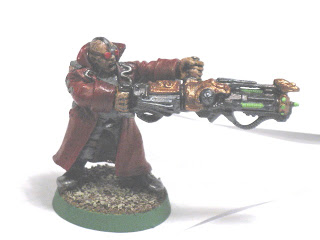 Here is my conversion beamer/las-cannon conversion. I originally didn't have any lascannons when I started my genestealer cult army but I had several heavy stubber equiped heavies. So I cut the hands off of the heavy stubbers and fixed them onto the conversion beamers. Instant Las -cannons. I will use them in the command squad or as a heavy weapon in an infantry squad.
If you are still reading then I think you might be interested in the back story behind the platoon being fielded along side my Adeptus Mechanicus Imperial Guard army. My AMIG army is mostly composed of catachan IG models converted to have bionics and built in weaponry. The story is the delaque gangers are actually devotees of the splinter Adeptus Mechanicus Metal Snake cult. They revere the slumbering Metal Snake beneath the surface of Mars and await the day it wakes and leads the chosen to a new understanding of all things. They consist of Tech adepts assigned to maintain the advanced equipment and lead the servitor guardsmen.
It sounds like a good starting point I may expand on later.
Posted by ColKillgore at 5:52 PM