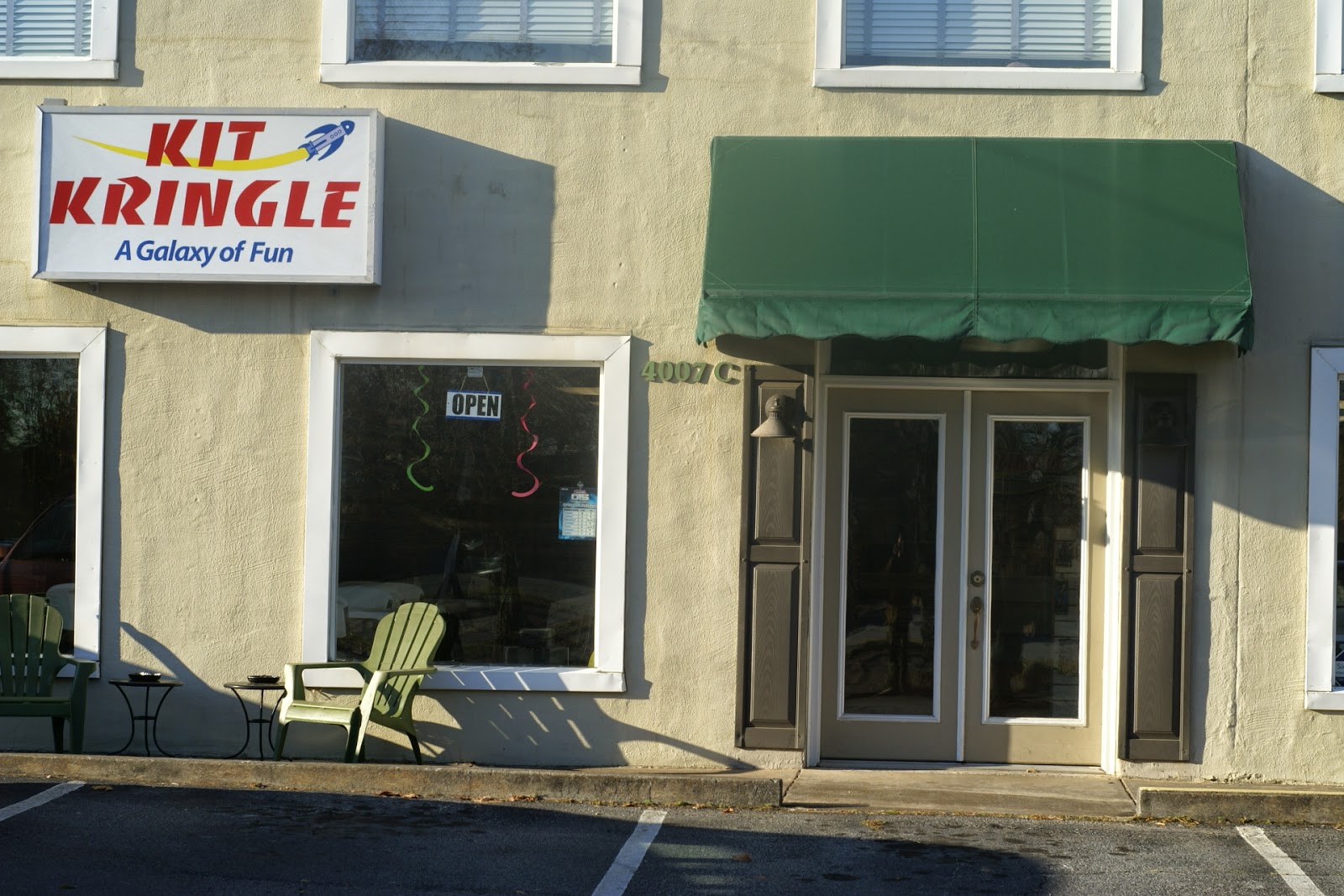 Hi Kids, Ok, brace yourselves!  There's actually an honest-to-God gaming store right here in Winston-Salem, NC, USA.  After 8 years in the wilderness, civilization dawns!  Hard to believe, I know. Just in case you don't believe it, you can get independent verification by heading on out to 4007-C Country Club Road, near the intersection with Gordon Street. Or calling 336-760-0065. Or emailing customer_service@kitkringle.net.  Or going to www.facebook.com/kitkringlewinston. 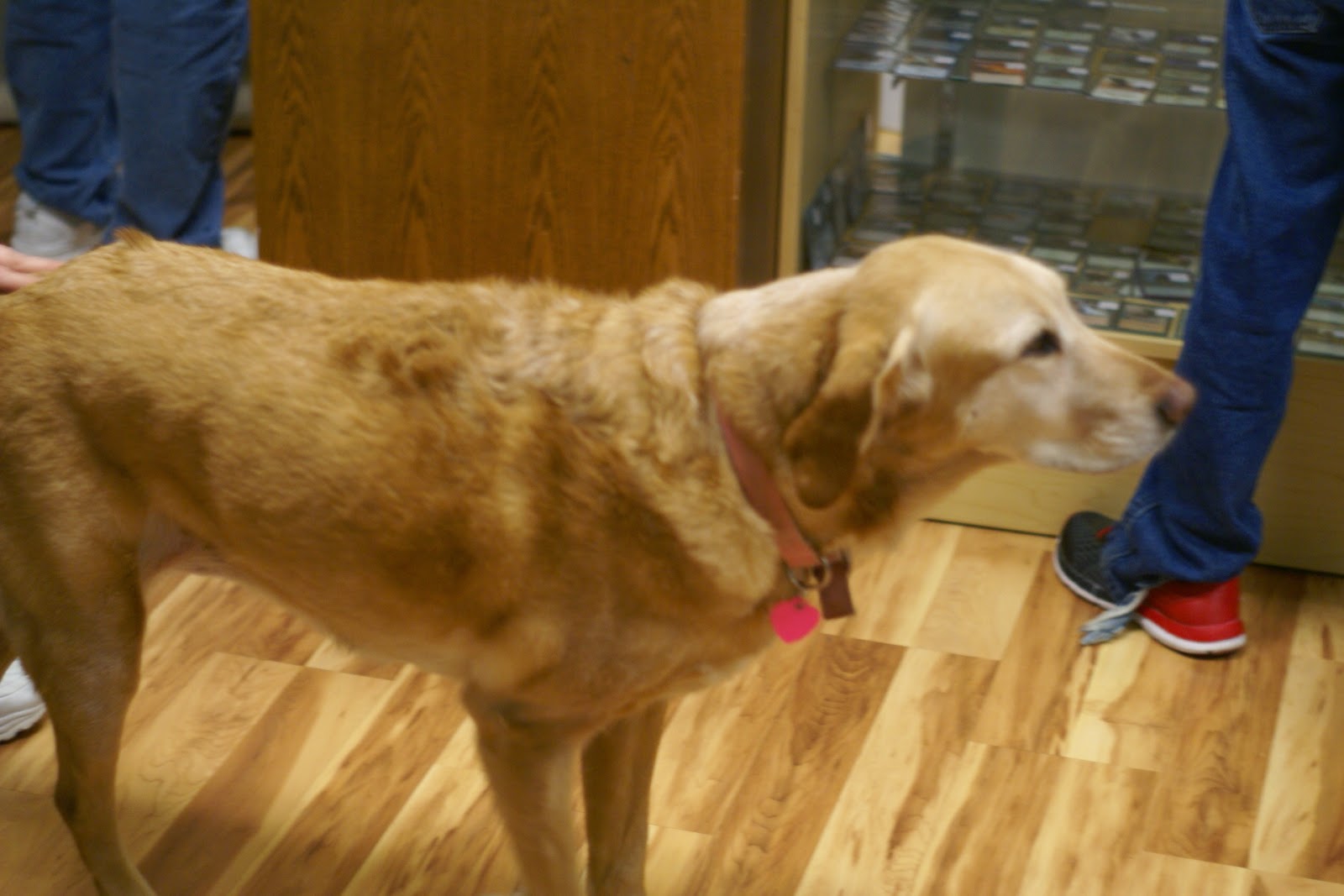 It's Bunny the Wonder Dog!  Official greeter/guard dog/snack nibbler!  No one gets by un-sniffed!  Every store should have a mascot, says Bunny! 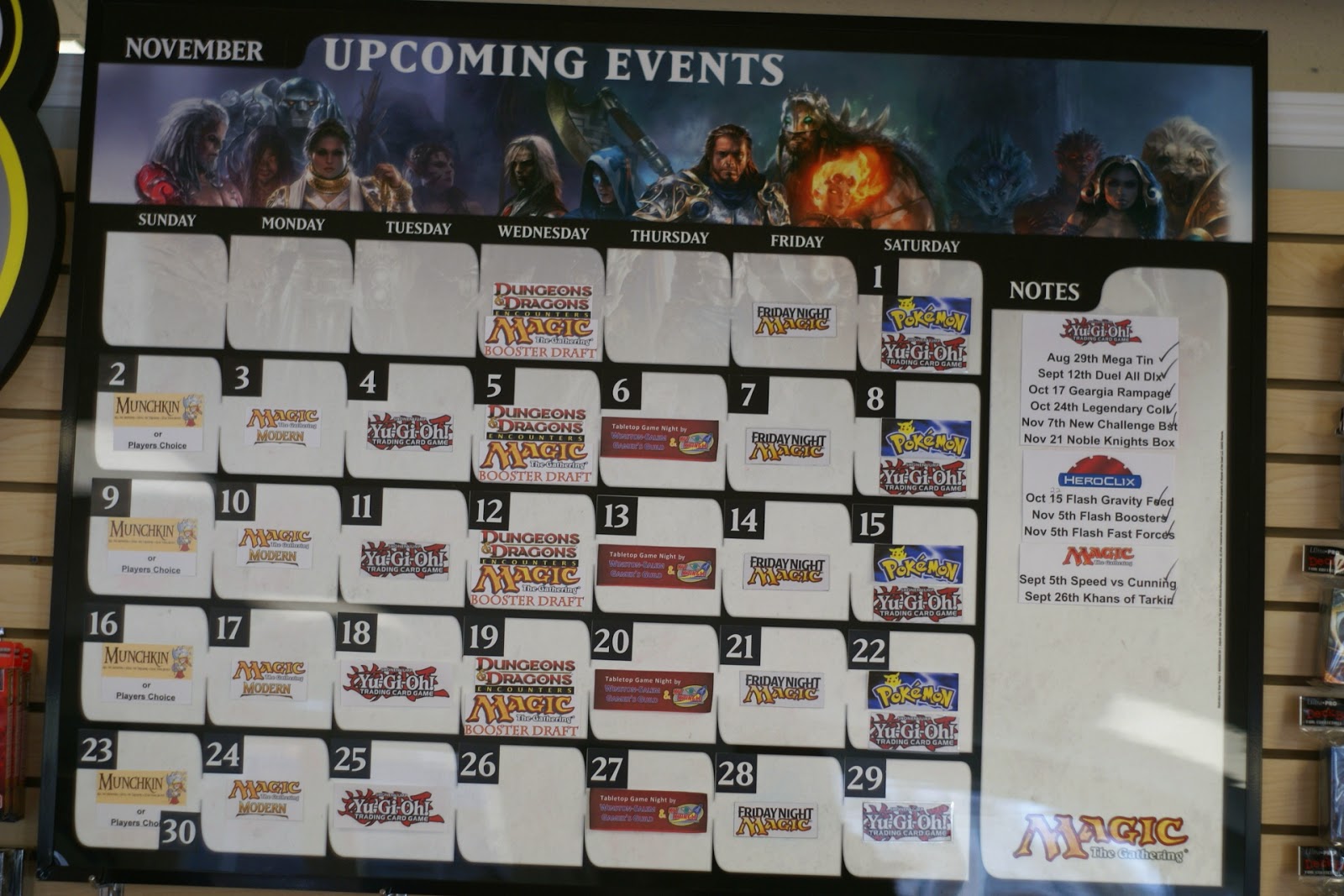 Looks like they even have a calendar of what's going on! Right now they still have table space available on Saturdays, so I was thinking maybe this could be a nifty place to set up some good old fashioned South Dakota Grudge Match miniature games! Naturally, I took some shots of the stock. 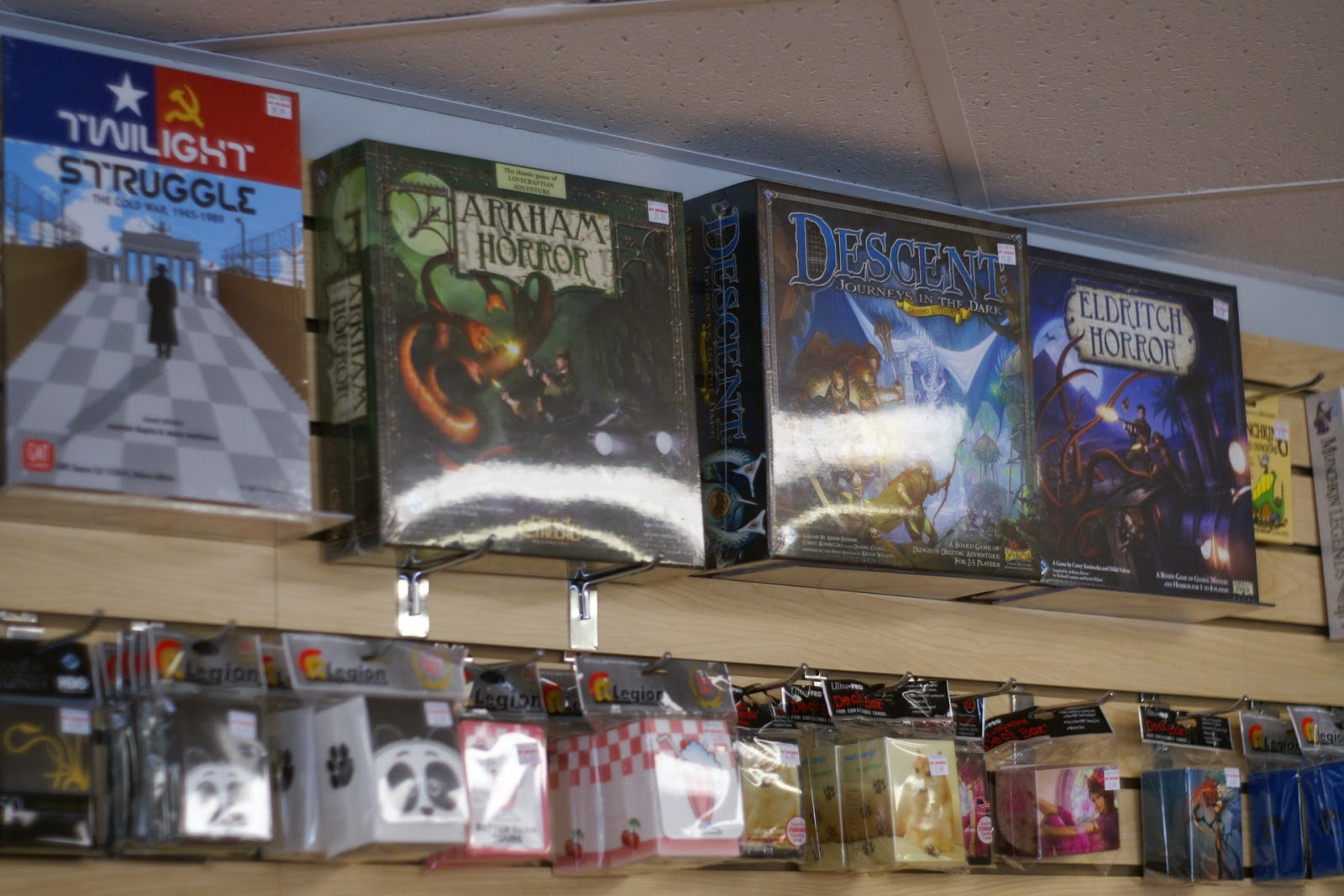 Arkham Horror!  Oh the humanity!  Did I ever tell you I hold a Masters Degree in Metaphysics from Miskatonic University?  True story... 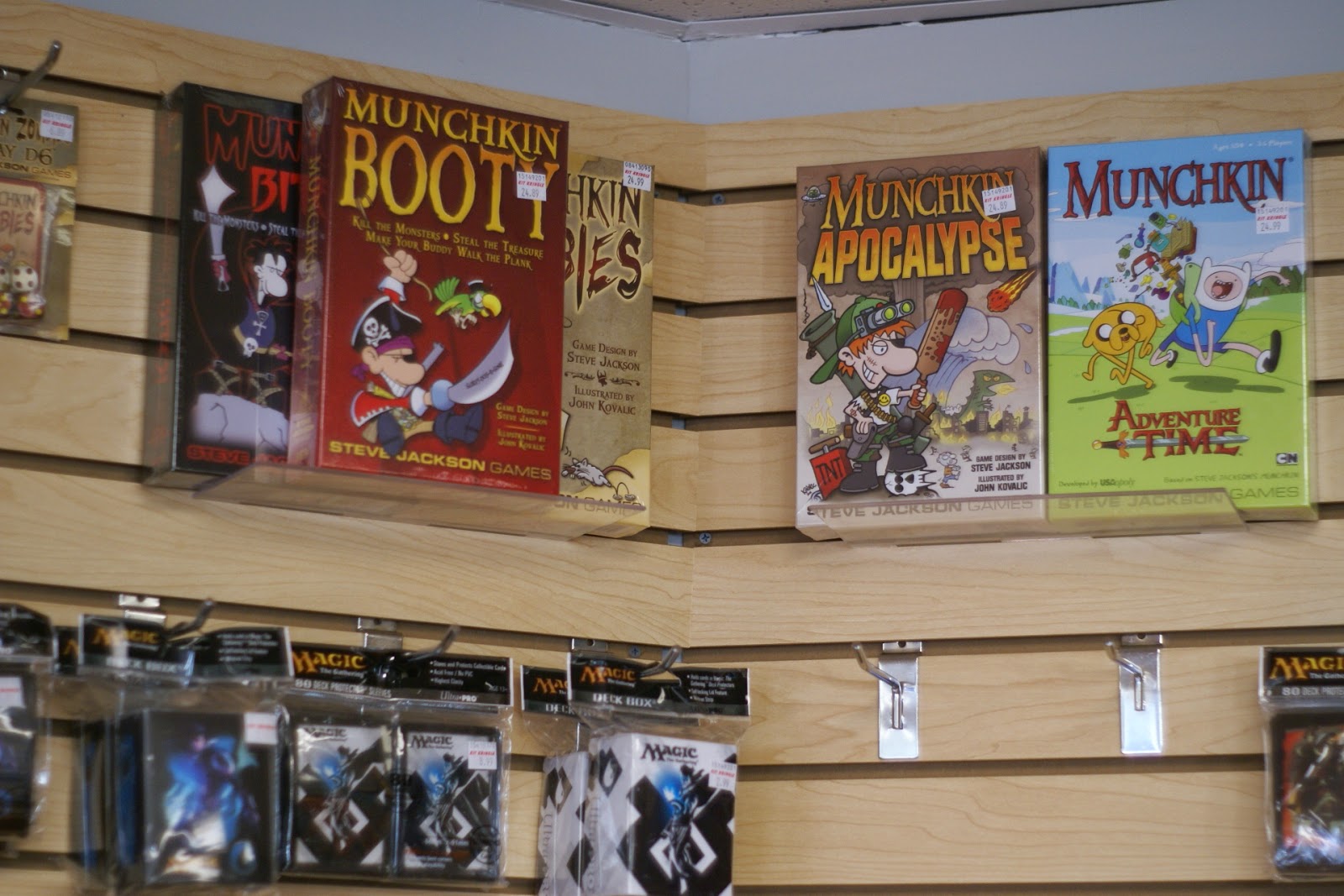 Steve Jackson Games.  Not Ogre, but can you really blame them? 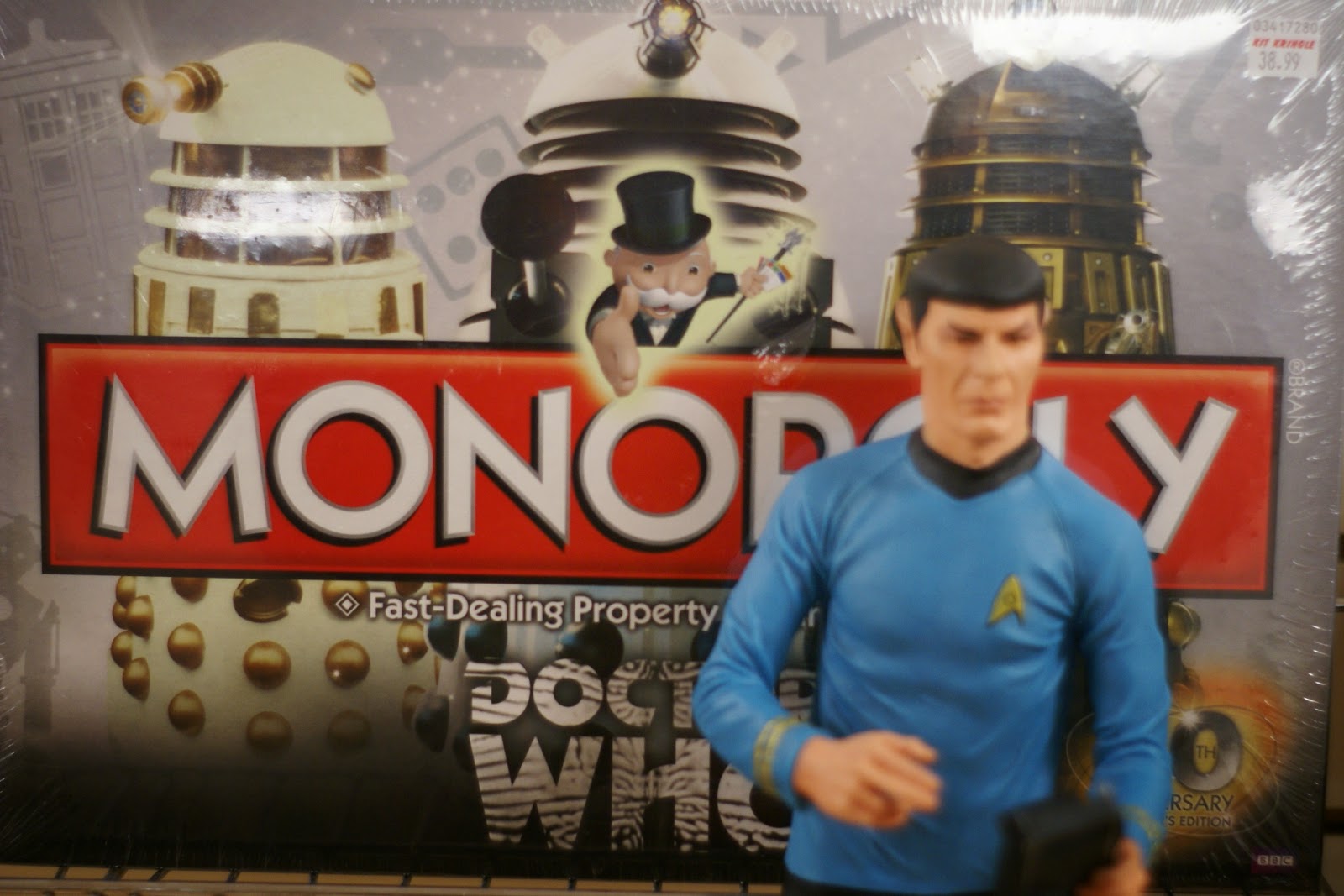 Dr. Spock!  No, not the guy who wrote that book on child care. The interesting one! 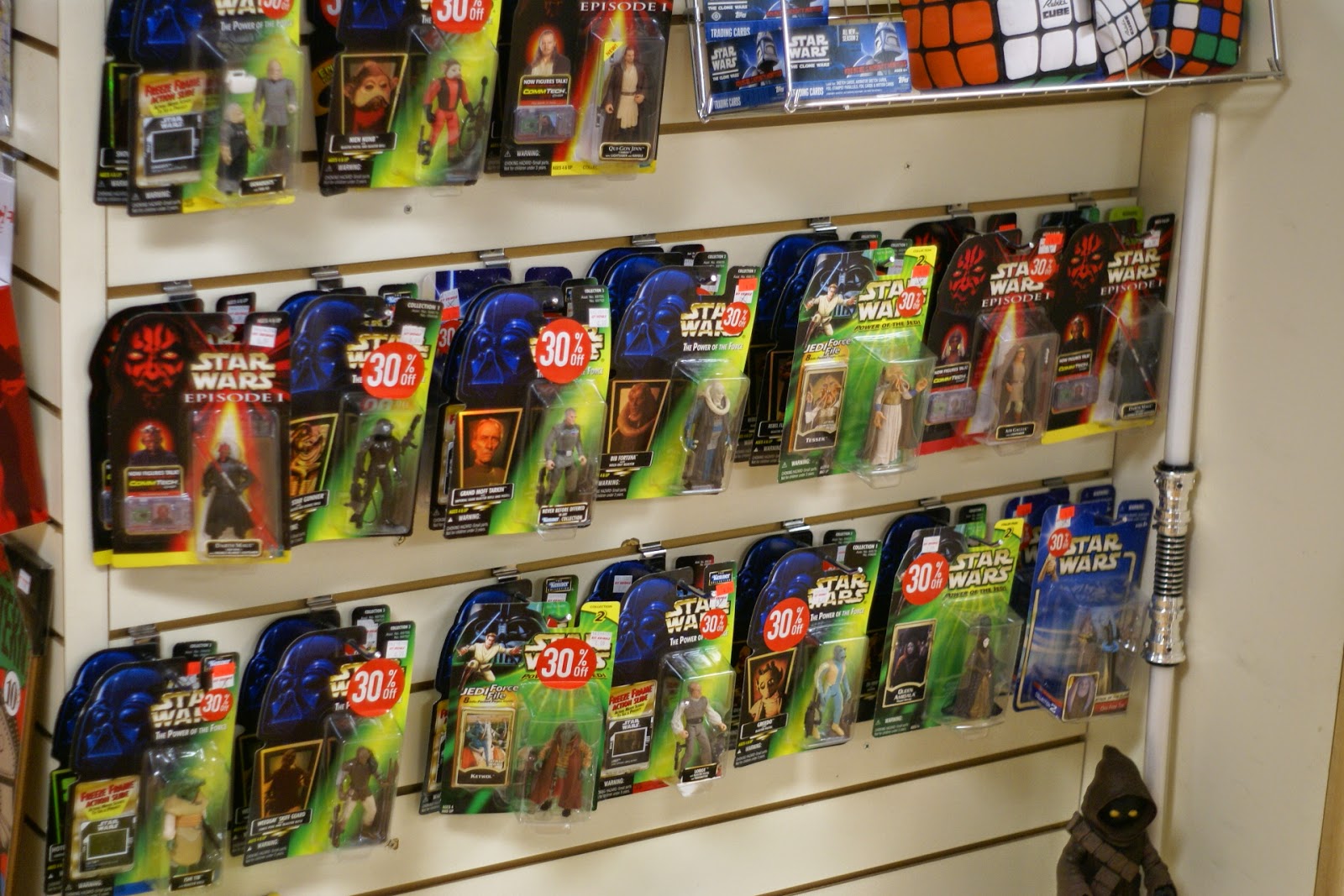 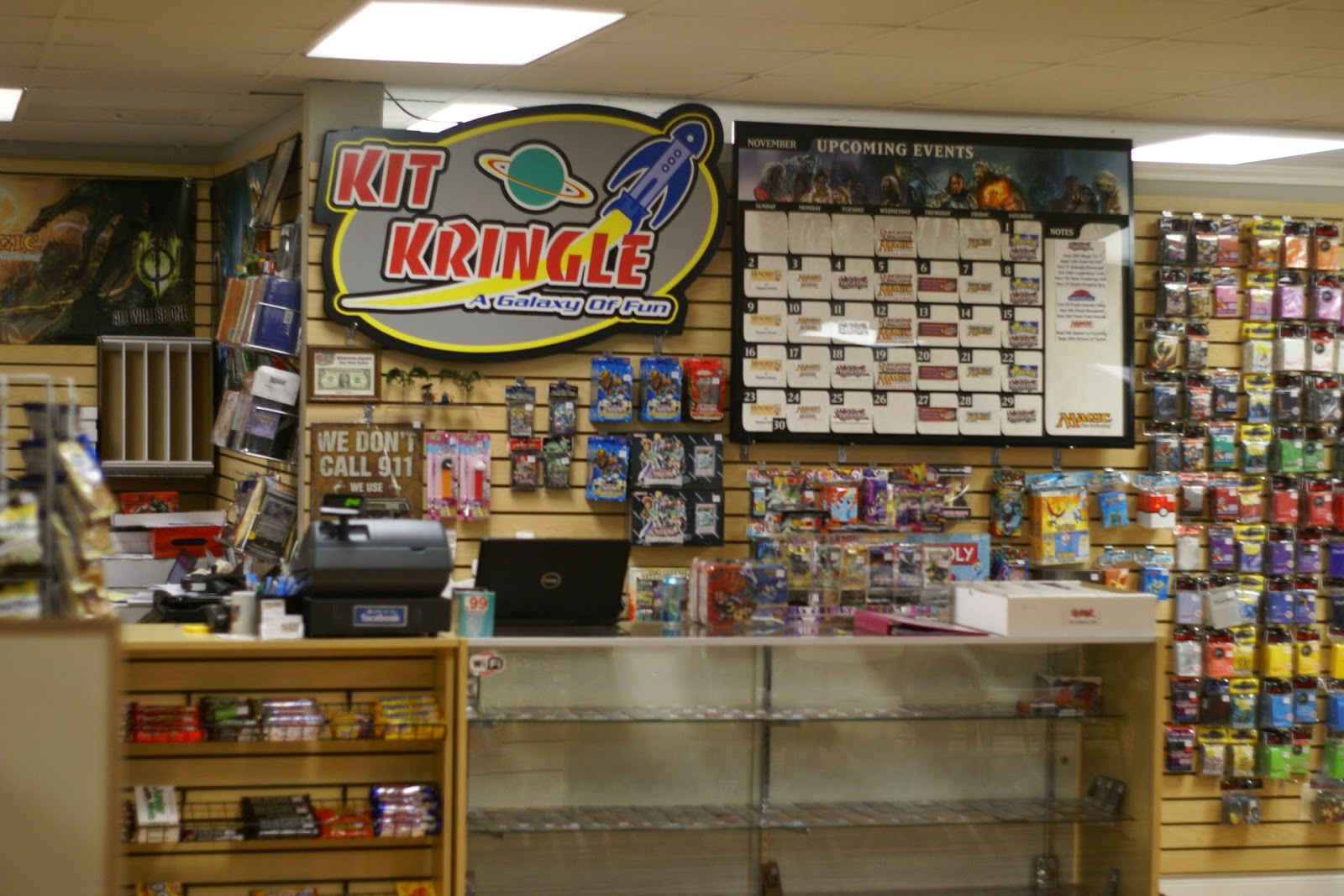 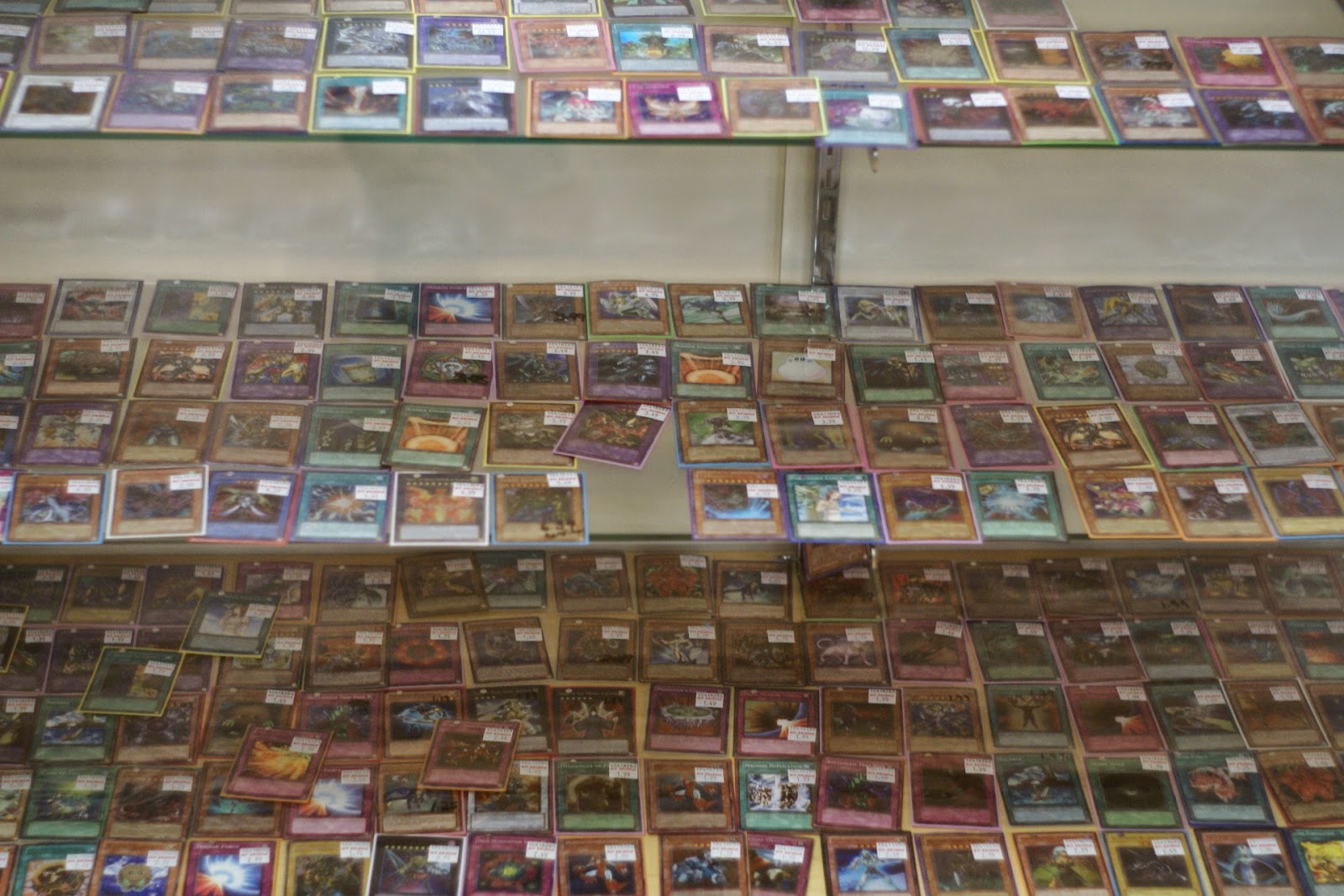 Holy Cow!  What are all these cards for?  Magic?  What's that?  A game you don't have to spend ten years painting miniatures?  What fun is that?  Better not answer that. 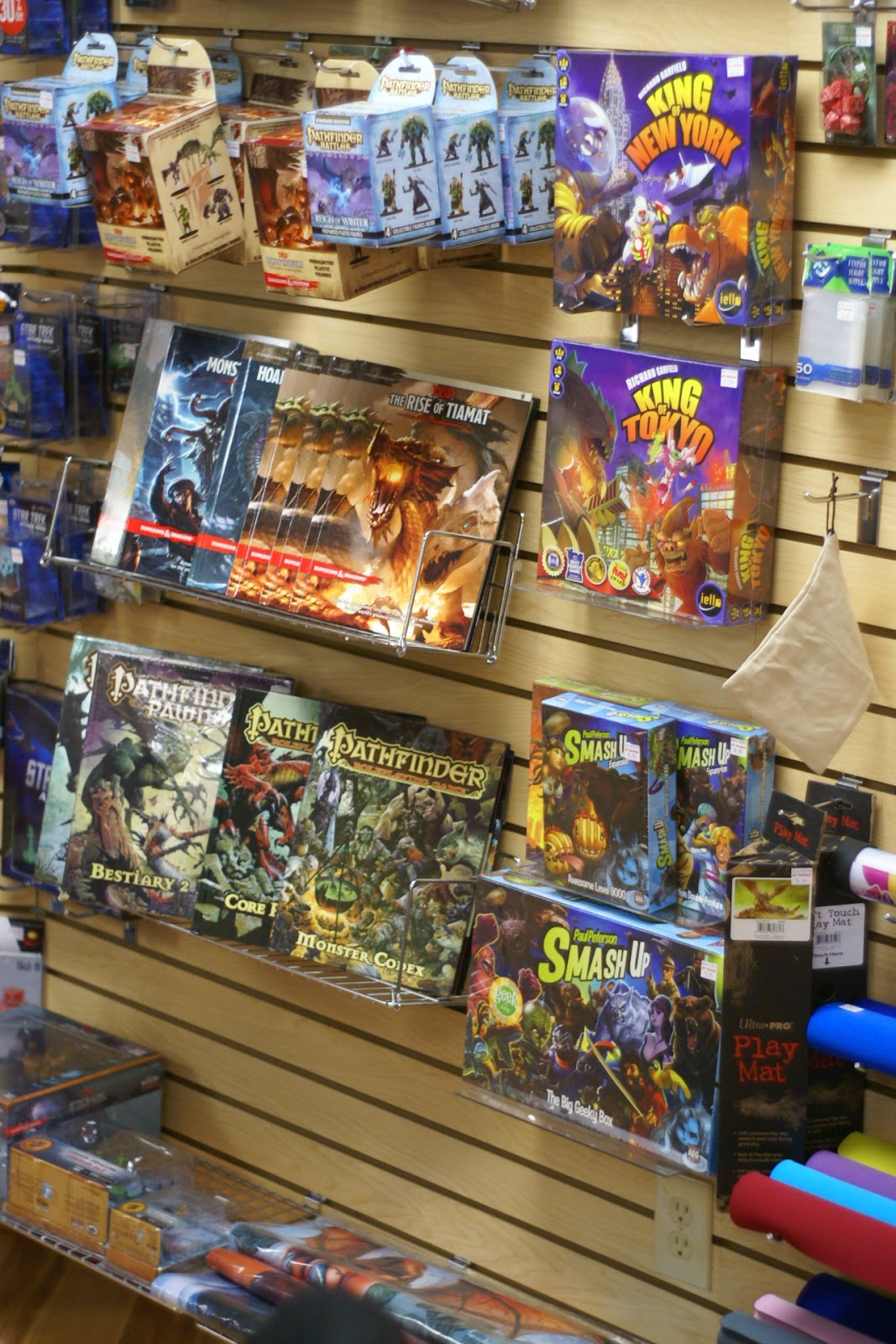 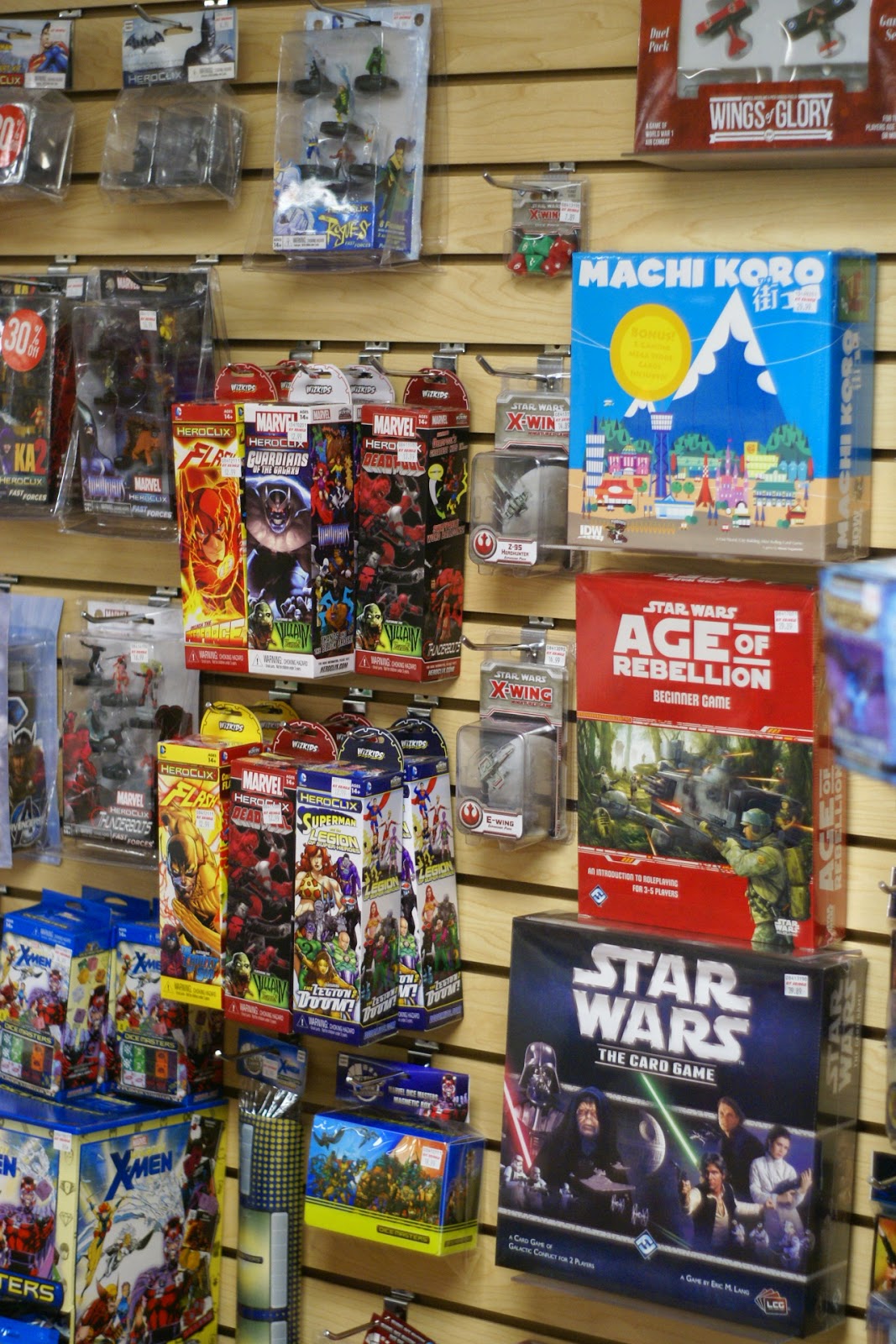 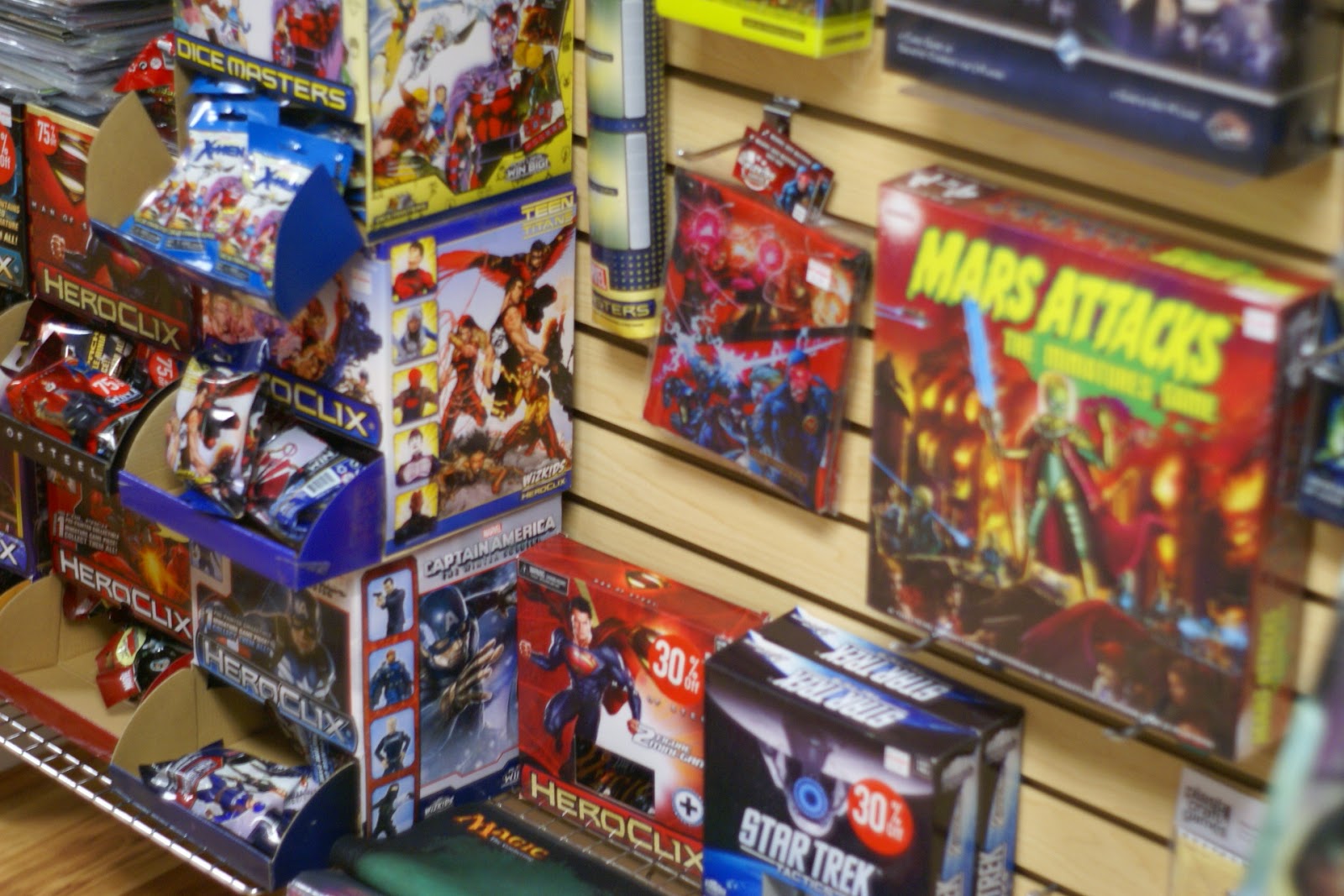 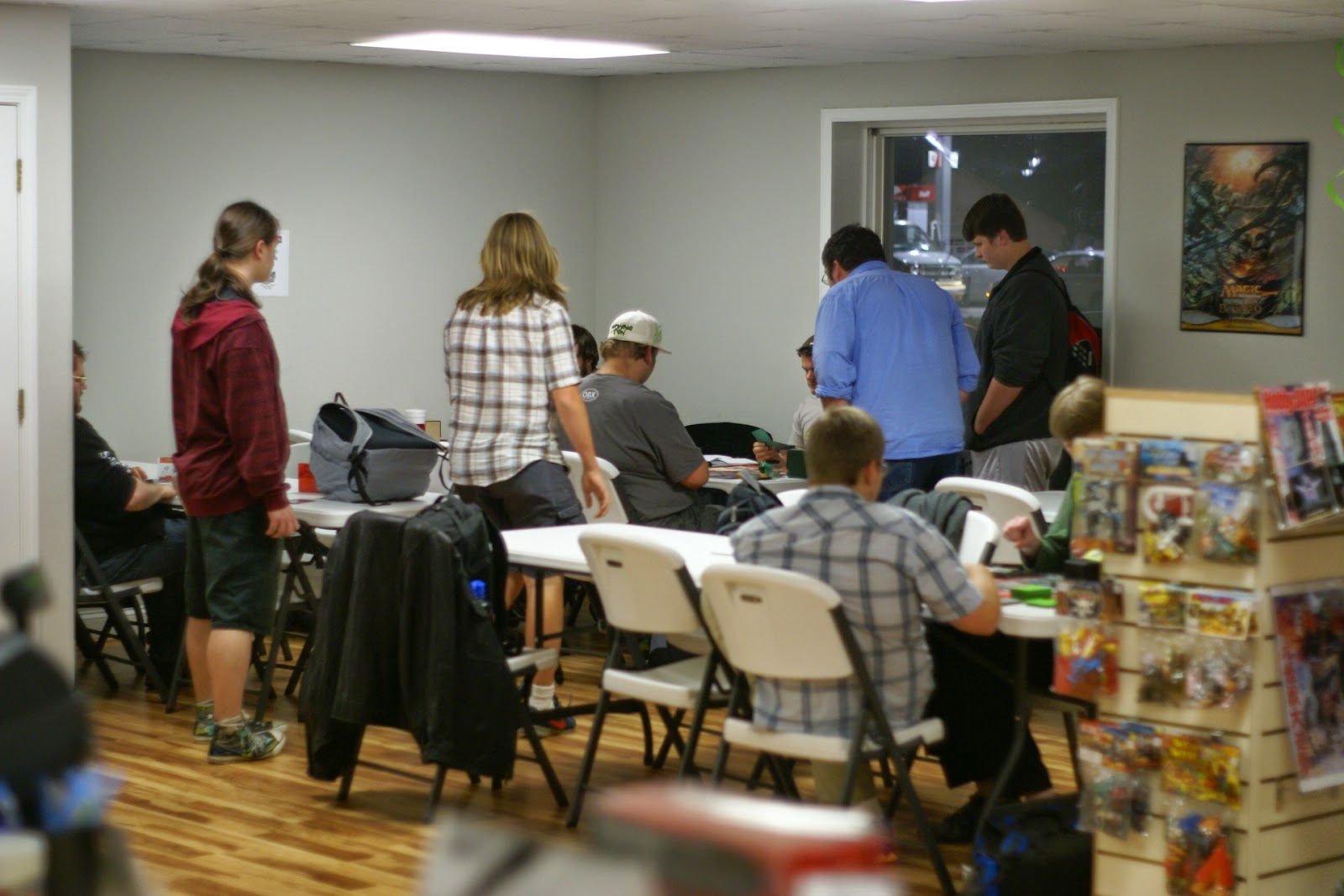 And of course some shots of the Gaming Space!!!  This corner is about 1/3 of the tables available.  It was Friday Night Magic, so there were quite a few lads in attendance. 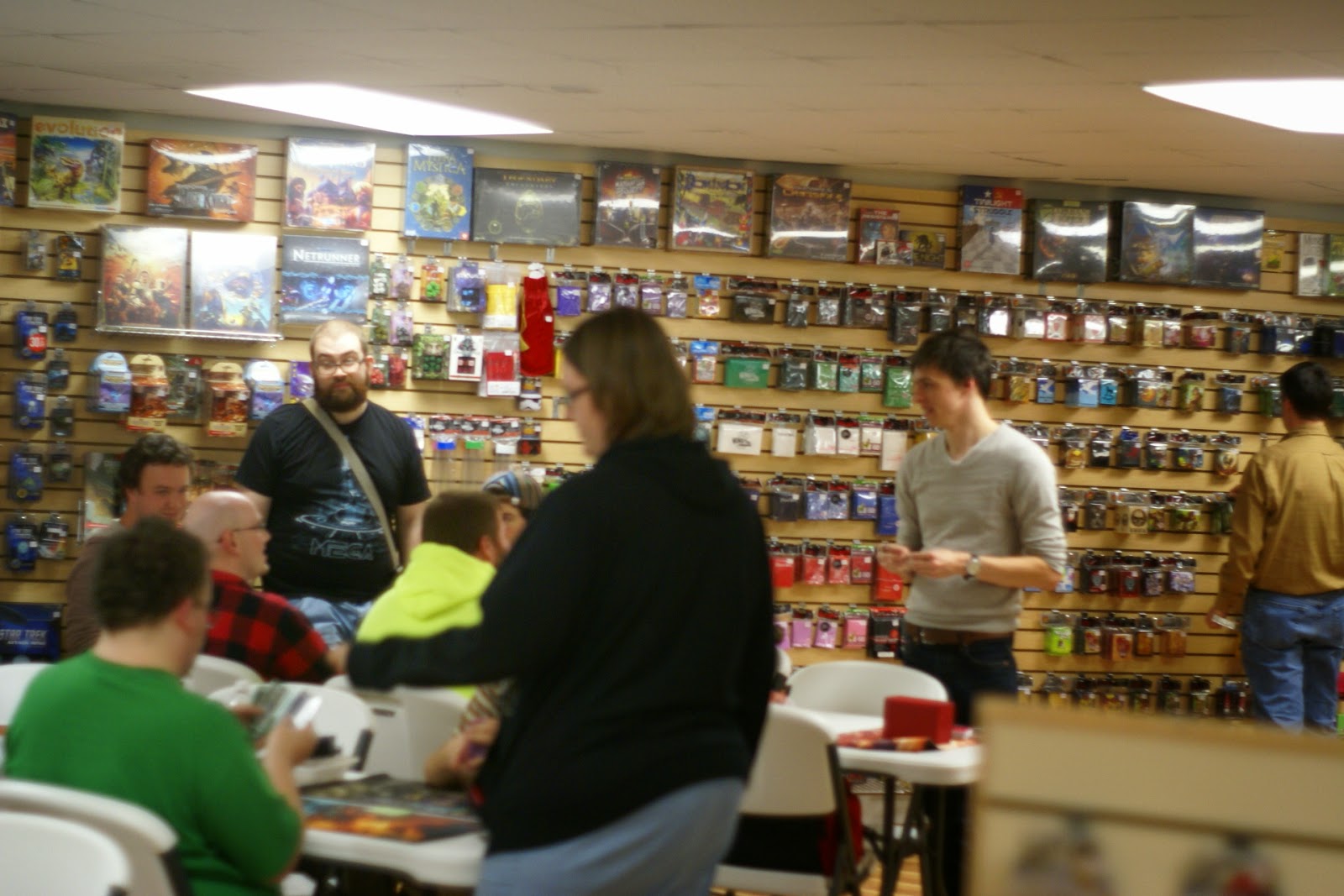 Another shot in the other direction.  Such cheerful gaming lads!  There were another handful of tables not in either shot.  One of the W-S Boardgame group meet here every other Thursday nights, and I heard a vicious rumor that there are a few guys who show up to play Dystopia Wars on occasion!  Now if we could just ease them real subtle like into the joys of miniatures...  What does everyone think? If we can get a few of the lads together we could do some Disposable Heroes, Flames of War, or The Sword and The Flame...  For those of you who like to plan ahead, there's a pizza place across the street, a deli and a diner just 100 feet away!  And an ABC store even closer if you have to drown your sorrows after rolling 35 "1's" in a row. Or is that just me?
Posted by Chuckaroobob at 12:33 AM

I am going to check this place out. Winston is deliveried again into the light.