Even though I was last in the 40k league another player has dropped so I have ended up in the league play offs. It is 1999 points and I have been working on a list to throw the other players for a loop. The main surprise is I plan to take some Imperial Guard allies. The leader for the troop of choice for the detachment is a Veteran squad. Who better to lead the squad than Gunnery Sergeant Harker. Nothing like having feel no pain and toting a relentless heavy bolter. 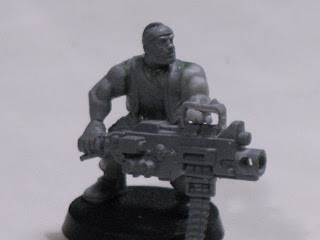 I didn't have the time to wait to order a model so I raided the bits boxes and pieced one together, It is still a work in progress and the heavy bolter is just hanging by the pin in the wrist and by the front hand grip. There are a bunch of conversions floating around the web and this one is similar to many. I used the chaos heavy bolter and the front carrying handle is made from some plastic strip and the hand guard from an ork choppa. Looking at the picture I still probably need to file down the hand a bit more to match the wrist but once I glue it together and add a little green stuff it might be okay.

I'm thirsty. And there you go NOT using an autocannon.