On the Work Table

I am planning on playing in the Mordheim league being organized by Tony through the GameonGw club. Saturday is the first day of the league and I am trying to make it to the Cage to get in some games. I searched through the war bands and finally decided to use the Tilean war band in the Lustria Campaign from the Town Cryer 22. 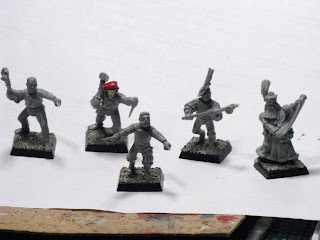 Here are some prototype Heroes. Two champs with mace and dagger, A young blood with a two handed hammer, a the young blood astrologer with a mace and dagger and the captain with a rapier and a dagger. They are from Remassen so all the heroes will get a leadership boost. The astrologer doesn't have any special rules, he is just a youngblood but I like the figure and he does have a mace hanging from his belt. 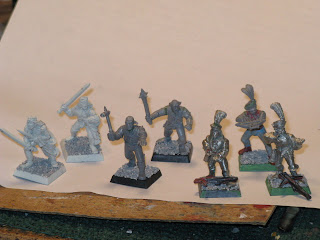 Here are the henchmen. Two duelists with sword and dagger, two warriors with mace and dagger, and three marksmen with crossbows. This will give me 12 models in my starting war band. I went equipment lite to pad the roster and hope the three marksmen can give enough cover fire. 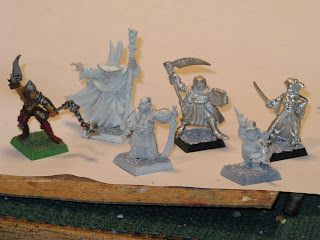 Here are some hirelings I am planning to paint up and maybe use during the league. A pit fighter, the wizard Nicodemus, Arabian Merchant, Priest of Morr, Halfling scout, and Vampire Assassin. The Priest of Morr isn't actually a hireling he is a replacement hero but to add him I will need to drop a champion and probably a henchman to cover his cost. The flip side is he is a spell caster of a sort. I have a few days till I have to make my final decisions. Here are a couple blasts from the past, two Rogue Trader Keeper of Secrets that I have had since the beginning of my hobby experience. They were badly assembled, poorly painted and needed rebasing onto larger bases, so into the Simple Green. Paint striped, reassembled with a good bit of green stuff and rebased onto 50mm bases in all their greater daemon glory. Some would say they are a little small compared to the newer greater daemons but I think as them as the little Keeper of Secrets that what it more. 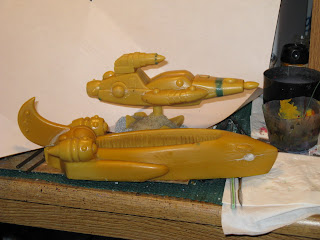 Here are another two blasts from the past an Eldar skimmer hawk in the foreground and an eldar skimmer scorpion on the stand, both from Epicast. I just recently traded with a buddy of mine to get them and aim to use them in the next big apocalypse game put on by Matt P. The Scorpion I plan to play as a fire prism tank and the Hawk as a fast skimmer with no weapons, 10 armor all around and access to the eldar vehicle upgrades. 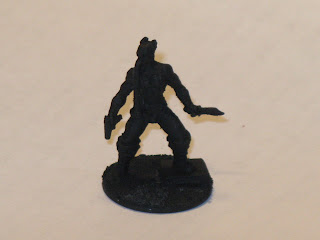 Last is the dark man a new Nemesis for Prospector Bob and his Cohorts in our long running Pulp Campaign. He will get a little better name once I get some paint on him. Bad picture but he is a horror cliks model I rebased on a washer for the pulp games.
Posted by ColKillgore at 9:05 PM