Once again we returned to the Basement Of Heaped Miniatures for some gaming. We decided to play test the Operation Barras game again before we run it for the Catawba gamers in January. We switched up with Chuckaroo and John B running the West Side Boys and me running the British. I had though about the scenario and cracked open the rule book to get a better understanding so maybe the game might go a little smoother. We used the Disposable Heroes rule set with the Seek out, Close with and Destroy, Man Among Men and the By the Knife: Soviet invasion of Afghanistan supplements.

The game is based on A British operation to rescue some British troops captured by A rebel gang in Sierra Leone in September of 2000. This isn't a historical refight of that engagement but a fun mulitpalyer game loosely based on the historical event. As the board sets North is to the right. The lower village is Geberi Bana where the hostages are kept and the upper village is Magbeni where the captured British Land Rovers are held 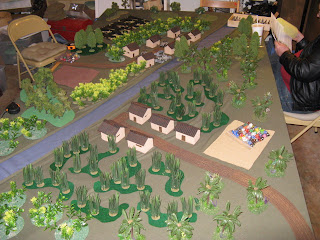 A return to the battlefield. Chuckarro did a good job recreating the battlefield from the first game. The only real difference is that the Rokel creek is narrower this time to allow more room to maneuver. We still played that the river was 40 inches across. 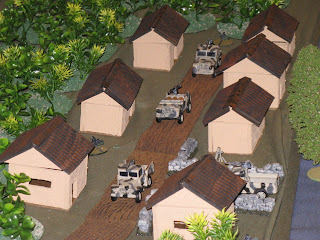 The village of Magbeni. Where the West side boys kept the captured British land rovers. A New victory condition for the British was to recapture the Land Rovers. This was to insure the British made a move into Magbeni instead of hunkering down and waiting till the hostages were rescued from Geberi Bana. 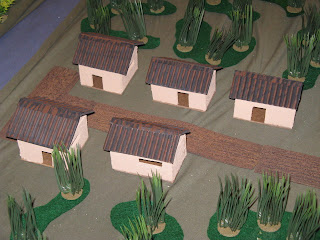 All quiet in Geberi Bana. A side note is Chuckaroo finished the tin roofs of his buildings. 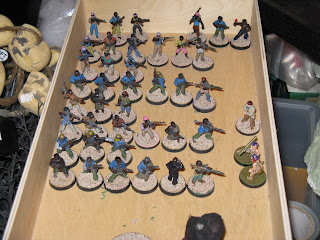 West Side Boys Defending Magbeni. Four squads a command section and a SAM team. They also had several support weapons. These use the Zipra list from Man Among Men Rhodesian war supplement. 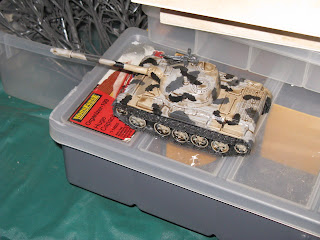 The T55 which would sadly not see the table again this game. 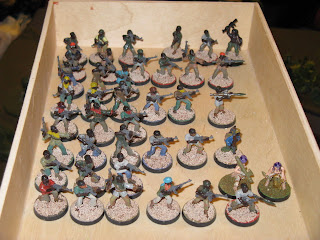 The Defenders of Geberi Bana, again four squads a command section and a SAM team. These use the Zipra list from Man Among Men Rhodesian war supplement. 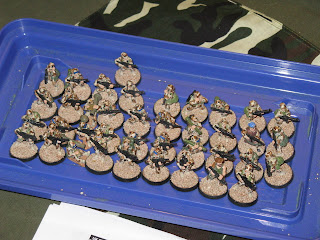 The British assault force. Two command sections with three fire teams each. All had extra M72 law rockets. These use the Elite British Infantry list from SOCWAD book. 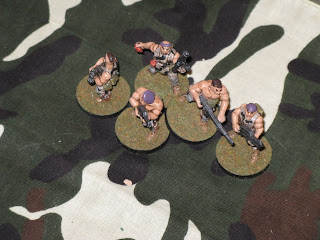 The British lead element , a sweaty SAS Team. These use the British Special operation list from SOCWAD with the addition of the everybody shoot rule from the US Delta force list. 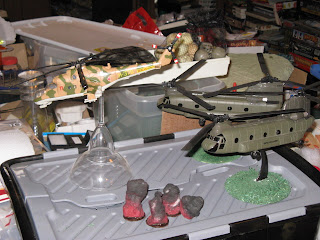 The British Chinnoks and the Sierra Leone Mi-24 Piloted by Neal Ellis, stats for the Chinooks from SOCWAD and the Hind from By the Knife. 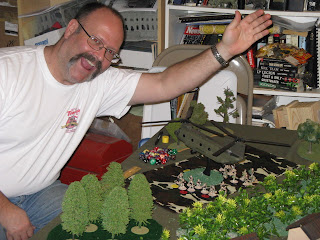 Chuckaroo hams it up for the camera as the British fast rope from the Chinook. 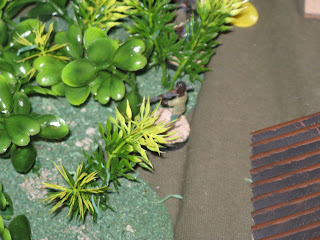 The West Side Boys in Magbeni activate and run into the jungle. We changed the number to activate on the first turn from a regular guts roll to a 3 or less but Chuckaroo still got the troops going. 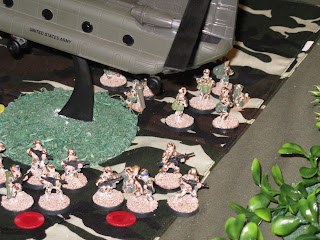 Two fire teams end up pinned after fast roping all four units down from the helo using one activation. 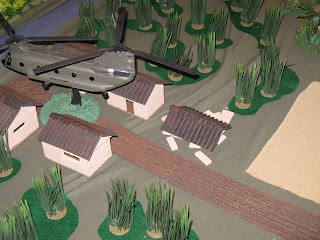 As the Chinook flys low over Geberi Bana one of the shanties collapses from the rotor wash. We roll to see if the hostages are in the building and they aren't. 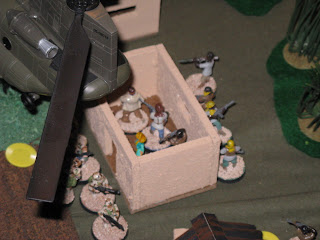 The British Commander fast ropes into Geberi Bana and find the hostages in the second shanty. 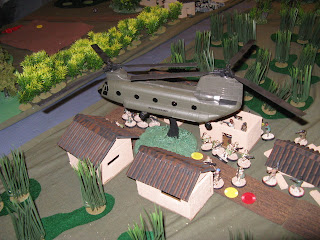 The rest of the units fast rope out with only one unit being pinned. 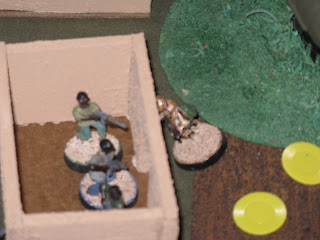 A West Side boy squad activates and downs three men from a fire team. 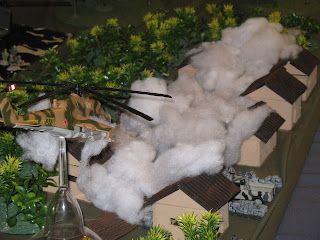 Neall Ellis flys over and rockets Magbeni, but only does minor damage. In the first play test we played the helicopter rules incorrectly with a Helicopter being able to return and leave to board every turn. The correct way to use them is that a helicopter has to stay off board at least one turn before returning. 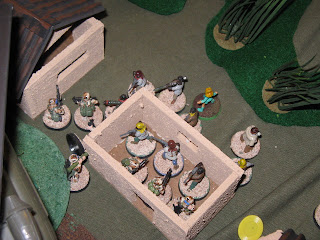 The British Commander's team and another fire team charges in to rescue the hostages from their captors. 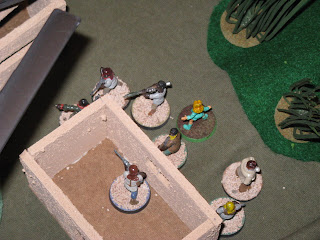 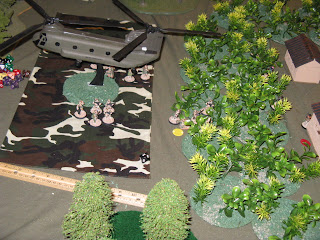 The British move out of the swamp and into the jungle. 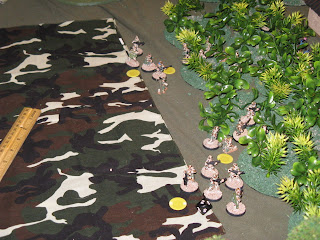 The Chinook leaves the table as the rest of the British struggle out of the swamp. 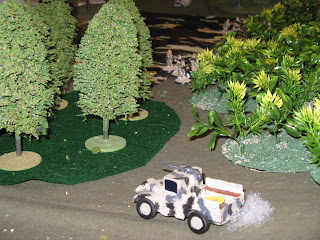 A captured land rover activates and come around the jungle edge. It fires up a fire team with its .50cal hmg and kills two men. 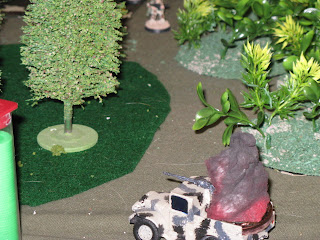 A survivor returns the favor with a little LAW rocket love, destroying the rover. 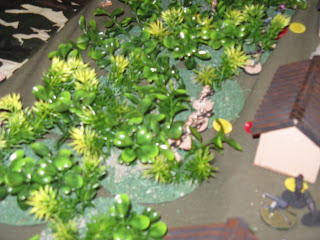 The British get to the edge of the jungle and bring Magbeni under fire. 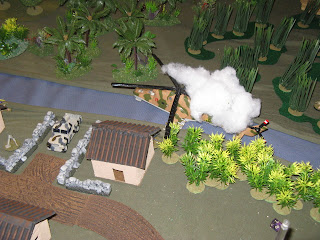 Neall Ellis returns to the fight and get a SAM for his troubles. Chuckaroo rolls good and the Hind goes down in Rokel creek. 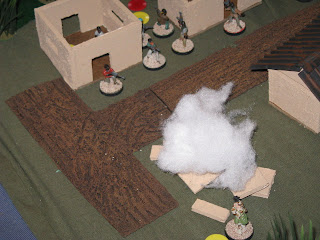 Because of his body armor the last man from the assault force in Geberi Bana survives a mortar attack that destroys the building he was hiding behind. The mortar was in Magbeni and Chuckaroo fired at the building in Geberi Bana to "help out" John's troops. The funny part is that John's squad above the destroyed shanty was in the area of effect of the mortar blast too, but I don't think he lost any men. It was probably the funniest moment of the game. 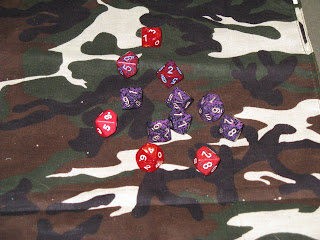 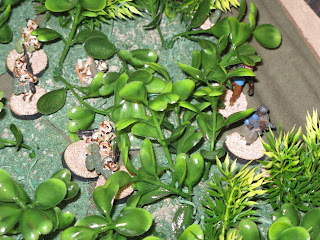 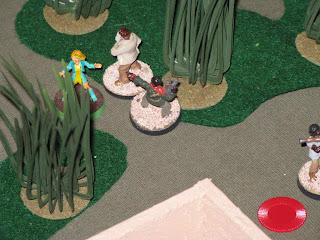 The West Side Boys hide in the swamp with the Hostages.

A loss for the British but we worked out more kinks for the game. Chuckaroo plans to streamline some of the damage rolls for destroying buildings and maybe give the British a bonus for close combat. A couple new scenario rules is to state which shanty the hostages are in in Geberi Bana and that the West Side Boys can't take the Hostages and run with them.

I had a good time and hope we can get another play test in before the January game but if not I think we are ready.

The game looks like a lot of fun, and with you playing the choppers differently from the first run you seem to have reigned them in a bit.

The rule where a helo that flys off board has to stay there one turn before returning made a big difference. Chuckaroo rolling hot for his SA-7 missile hit also helped by downing the Hind on turn three.
The light rocket salvo didn't work as well because of a better understanding of the machanic to damage buildings before being able to hurt the troops inside.