Hi Kids,  I know it seems almost impossible to believe, but yet again the Chuckster has won a game!!!!  My record in Warmachine has now surged to 3:150!!!!  I'm out of control!!! I'm on a rampage!!!!  This campaign of terror is completely beyond the keen, there's just no telling where it may end....  Grand Championships, Lecture Tours, Trophy Wives, World Domination.....
Or maybe my friends (God bless 'em!) will stop letting me win...... 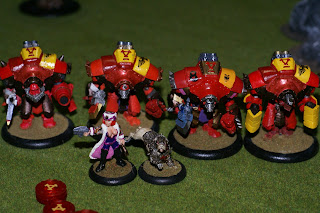 Here we have the Heartbreaker and Lifetakers, a corn-fed line-up if ever there was one; two Juggernauts, a Destroyer, and a Berserker thinly disguised as a Maurader.  The little lass down in front is Zerkova (the Laughing Monk Miniatures "va-va-voom" version) and her pal Fido. Across the pitch is the Hated Enemy; Cygnar!  Too bad I have no idea who these folks are; heck, I had to look up the names of my own 'jacks!  I do know that there are all sorts of guns lurking over there.  Even the caster is a gunmage. Heavy barrels, armor piercing, laser rangefinding,  yadda-yadda-yadda...  If I know one thing about the V-man; its those figs are exactly what they're supposed to be, so you informed consumers probably know what they are anyway. 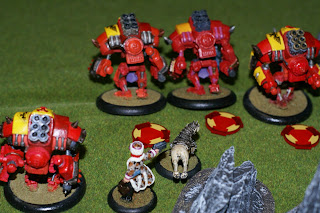 Early in the game Zerkova tosses out magic-me-not spells to protect her 'jacks as they cross the wide open spaces of no-man's land.  Unfortunately it doesn't help with ranged weapons, and the right hand Jugg takes all sorts of impacts from the ENTIRE enemy army!  When all the explosions are over he's down to six (count 'em: 6!) damage boxes!!!!  Still feelin' good, feelin' peppy!!! 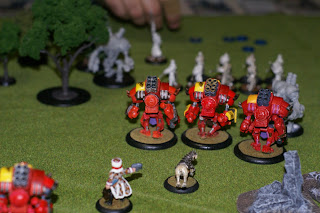 The damaged Jugg charges the nearest antagonist, but doesn't do much damage. No one else can get close enough to crank up the hate-mail, except for the Destroyer who lobs a shell into the ranks, killing one rifleman.  Gee, can you spare the ammo? 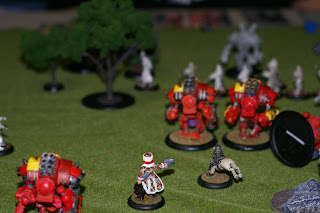 The Jugg gets crushed, while Zerkova targets a solo out to the left with a couple windblasts, but the dice-lice don't grace her with any hits!  Looks like she could be hanging out in the danger zone more than she thought!  Fido is just out of countercharge range, too. The riflemen redeploy to maximize firepower.  Holy Cow!  I didn't know they could get even more!! 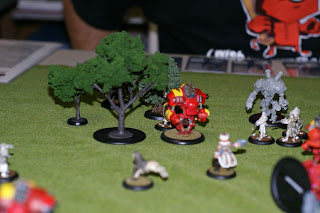 The Berserker charges into the enemy warcaster hoping to drop-kick her back to Cygnar, but only does a few damage points!  Those weedy casters are tough to hit!  Fido moves left to threaten the solo, the 2nd Jugg engages the Cygnar 'jack, and the Destroyer lobs another shell into the mass target, this time getting mega-hits!  Zerkova pops her feat, which means most of the enemy army can't do anything offensive for one turn. 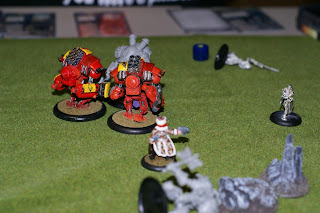 Fido kills the solo, the few remaining riflemen are heading out, the light 'jack is crushed, and not much stands between Zerkova and the enemy caster.  A few magic spells and it's all over:  chalk one Intellectual Victory up for The Chuckster!!!!!  Can I get a "Hell Yeah!!!!" 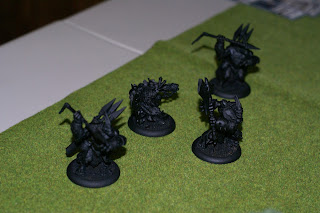 The pre-game show; a knock-down drag-out HORDE battle between the Trollbloods (2 spearmen, 1 axman, 1 caster) (it's the Baptism of Fire for this army commanded by Baron Vestal!).... 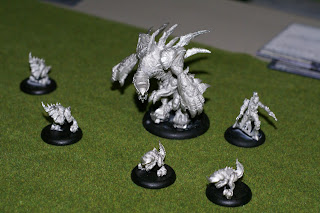 ...and the Everblight Wrecking Crew commanded by Von Shootalot!  These are the introductory boxed forces.  No, that's not a Blood Angel Death Company you see, but it's the next best thing:  A Carnivator!  Imagine a de-railed demon locomotive with a real bad attitude and diaper rash, and you've got a pretty good idea of what might happen. 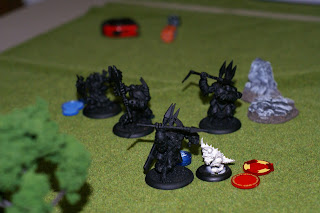 A zipper moves in for a little melee just to get the crowd interested; it's got spikey armor so ends up doing damage even as it takes hits! 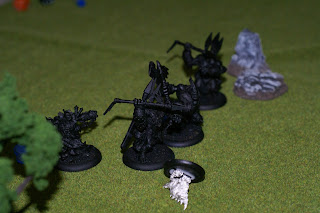 To put the zipper down good and proper takes more effort than the T-Bloods thought, but go down he does!  There's more where he came from, and they're lurking just on the other side of the rocks! 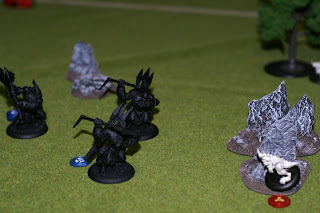 The T-bloods eye the enemy; one in the rocks, two in the trees off to the left....  but where are the real powerbrokers of the Everblight army?  They seem to be hanging back, maybe waiting for the zippers to thin out the T-bloods. 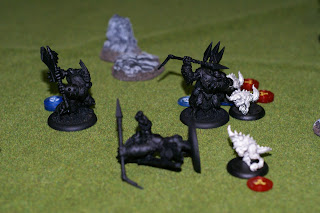 The zippers burst out of cover and smack around the Spearmen!  One is down for the count!  They're piling up the fury points. The Everblight caster is tossing daggers around with gleeful abandon, all sorts of funky special effects stagger the T-bloods! 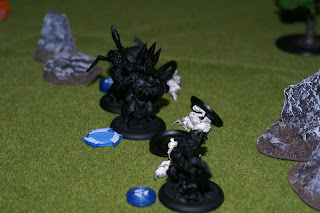 Payback!  The three zippers all get bonked on the head and are down for the count!  But.... 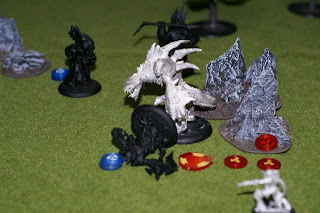 With all the irresistible force of an atomic powered sewage tsunami, the Powerbroker of Everblight leaps the rocks and comes crashing down on the T-blood warcaster!  With breath hotter than a woman scorned, two claw attacks and a massive cold-sore infected bite, it's all over but the crying.  Von Shootalot claims another big win!

All in all, I'd say it was a pretty good spot o' gaming.  I got to try out a new Warcaster, and the Vman got to play his beloved T-bloods for the first time.  One of these days I'm going to have to dig out all those unbuild Khador lads and see what they can do.  Someday.....

Posted by Chuckaroobob at 6:12 PM

Chalk up another one for the Chuckster. I knew it was just a matter of time till the tide turned.