Flames of War at BOHM

I got together with the lads at the Basement Of Heaped Miniatures for a rousing game of Flames of War. It was the first fielding of my IS-2s and one even survived the game. I took A Tankovy Batalon consisting of a M3 Stuart commander, a M3 Stuart light tank Company, An M3 Grant medium Tank Company, a Guards heavy Tank Company with IS-2s and a tank destru8ction comany with 4 zis-3 guns. The original plan was for Charles Patrick and me to play Soviets and John Bays, Steve Jones and Jerry w to play Germans. Jerry had other plans and Steve Jones ended up sick so neither showed. So the sides ended up with Patrick nad I playing soviet verses John playing Germans centered on 3 panther tanks and Charles fielding 20 or so Soviet T34/85s. Patrick fielded a mostly Infantry force with some low powered AT guns and one unit of su-85s. It looked pretty bad for us but we ended up giving Charles and John run for their money. The game ended when the last survivors of Charles tanks took an objective and wittled down Patricks infantry till they had to make a motivation test and failed. by that time I only had 1 IS-2, my command Stuart, the 4 zis-3 guns and a couple bailed Stuarts. All five of the Grants brewed up in the first after Charles fired them up. 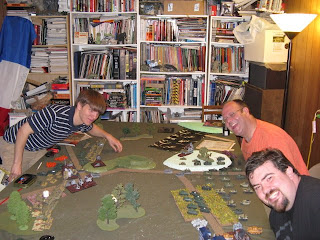 Here are the lads in the Basement of Heaped Miniatures. Patrick on the left and John right forward and Charles in the corner. 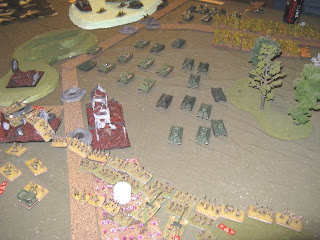 The Traitor T34/85s advance on the Soviet lines. 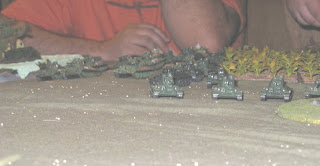 Table view of the oncomming horde. 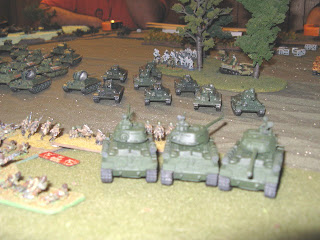 IS-2 stare down the T34s, right before a german flame tank came up from the rear and destroyed them.

Posted by ColKillgore at 8:17 PM

Yeah, that game turned out to be a lot closer run thing than I first thought. Maybe 21 T34/85's weren't quite enough. C'ya, Charles