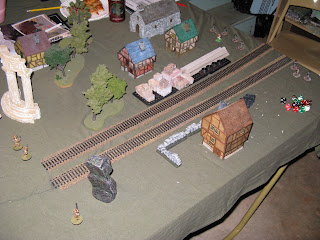 As the sun sank behind the mountain tops a group of Border Police head toward a isolated railroad siding to retrieve a mysterious package for Prospector Bob. Unknown to them on the other end of the track approached a group of bandits there to retrieve the same package for Major Von Kraken.
This is the set up for a game of 45 adventure played by me and Chuckaroobob at the BOHM. He fielded a group of police and I fielded a bandit executioner, a bandit deputy and 6 1/2 point bandits.
Posted by ColKillgore at 8:55 PM