I have been thinking about playing in a local Warhammer Fantasy Grand Tournament. This has let me looking over my armies and doing model counts to see exactly what I have and if I can build a fun to play and somewhat competitive army. The GT organizers have their own set of guidelines for building armies to weed out some of the more broken power army builds. One army I was contemplating was the Warriors of Chaos and lo and behold Chuckaroo gave me an offer I couldn't refuse. I now have another thirty chaos warriors to add to the army. I am prepping these for paint soon.

During the model count I found another oldie but goldie 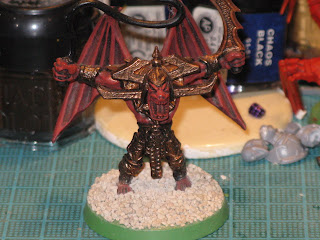 That being said, I will still probably use him as a Daemon Prince in the next Apocalypse game. 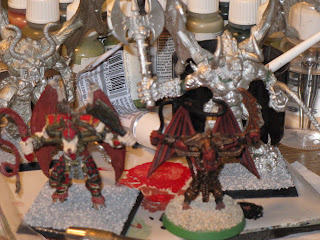 Here is a group shot of three generations of Bloodthirsters. When you get something right, stick to it.

Posted by ColKillgore at 9:05 AM