Family and Job conspired to keep me from playing any league games in the 750 point second round. Missing the second round puts me way out of the running in the league but the main reason I joined up was to get some gaming in anyway.
I planned to meet John B and get a game in but I was early and he was late. So I started a game against Hugh S and his Grey knights.

Platoon command
Officer with bolter
2 flamers and a grenade launcher

We rolled and came up with Night fight and Annihilation. That left Hugh's six kill points to my thirteen. I decided to combine the infantry squad but that is still 6 to 12. I figured I had lost the game from the start. All he had to do was put down six of my kill points and have one model survive and he wins. I figured I would have to try and table him to pull out a win.

I won the roll and choose to go first. I deployed the vet squad, the heavy weapon squad and the company command squad. 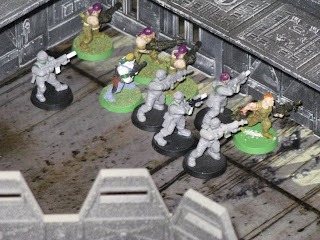 Here is the vet squad deployed in cover. I am using several of the lasgun conversions in the squad to make them stand out as veterans. 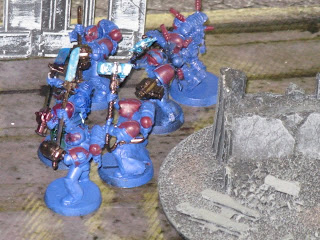 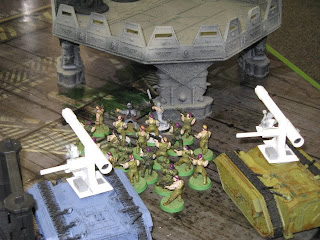 On my first turn I move the Hydra's on and the Infantry Blob. This is the first fielding of the Hydras. They would end up making a good show through the game. I end up not shooting anything because of night fight. In Hugh's half of the first turn he destroys my heavy weapon squad and shoots up the veteran squad who break and run for the board edge. 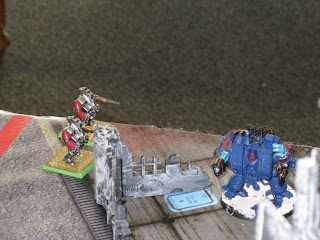 Turn two, My sentinels outflank and destroy Hugh's Dreadnought. It was the first time it saw the table and was destroyed before it could shoot. Such is the way of new models. I also dropped in my storm trooper squad that landed barely more than an inch away from the heavy weapon squad. I managed to make the dangerous terrain tests for the storm troopers. They then lit up the Grey knights killing all but the Justicar and one knight. The company command squad in the top of a bastion managed to snipe the other knight leaving just the Justicar. 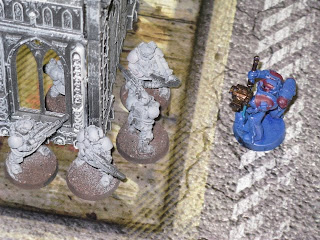 Impending Doom, The Justicar charges in and only kills one storm trooper, the rest pull their knives and hot shot laspistols and kill the justicar. 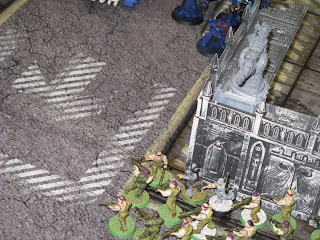 The Blob rounds the bend and comes into sight of the Librarian and Grey Knight terminators. 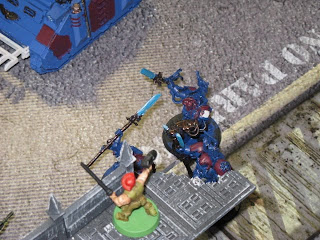 Marbo arrives and gets a one inch scatter killing most of the Terminators. The survivors from the Blob assault the remaining Terminators and manage to put them and the Librarian down then consolidate toward the Grey Knights up in cover. That leaves Hugh with just his strike squad and a Razorback. 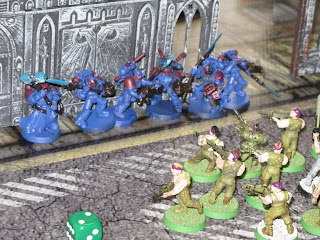 Game till the end, Hugh's Grey Knights leave cover and shoot up the Blob squad. 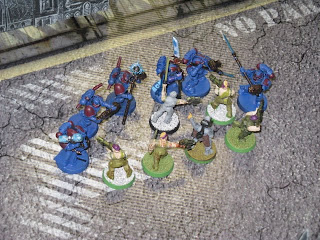 Then he charges in and butchers the Blob Survivors. 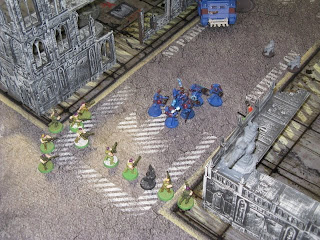 This leaves the Strike squad in the kill zone. I move up my special weapon squad and toss their Demo Charge and hit on target killing the entire squad. This left Hugh with only his razorback. 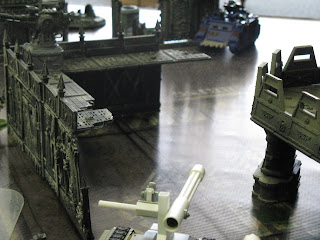 Last play of the game the Hydras light up the Razorback and destroy it.

It was a great game. I thought I had lost it from the start and was playing for a draw. I got lucky with the demo charges. The Hydra worked well, especially the re rolls. The Company command squad with four snipers also managed to get a couple good shots. I lost one sentinel, the heavy weapon squad, the vet squad and the combined Infantry squads. So it ended up four to six.

John and Sons of Taurus had arrived and played a game while Hugh and I played.

Can't wait to see those conscript hordes come out to play!

I don't know if the hordes will make an appearance. I am trying to get some units painted for the league bonus. One 6man special weapon squad is alot quicker than a 50 model conscript squad.